How to make a solar Jack-O-Lantern with a real pumpkin.

I've made these solar Jack-O-Lanterns few years now.  And I love how they light up when it gets dark. The safety factor of not having a candle is also a huge plus! 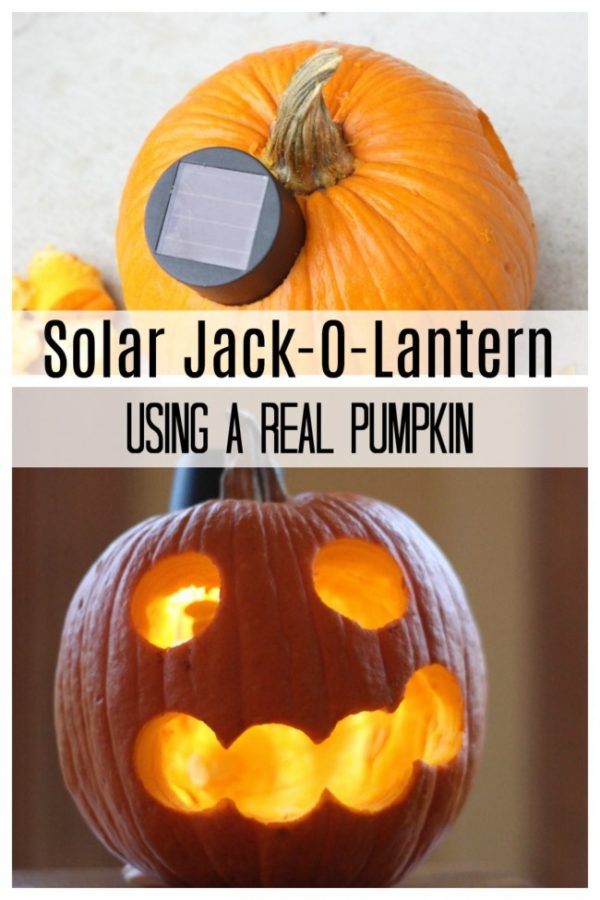 Sometimes when I need blogging supplies, my shopping experience doesn't go as expected.

"I've had enough and I'm leaving!" Yup! That's what the hardware guy told me. I know I can be weird  sometimes. Ask my teens! They'll tell you. But this guy had enough. But, I really don't know why? I didn't think I asked for anything unusual and I only offered to tell them what I was doing so they could help me find the part that would fit my drill for my project! 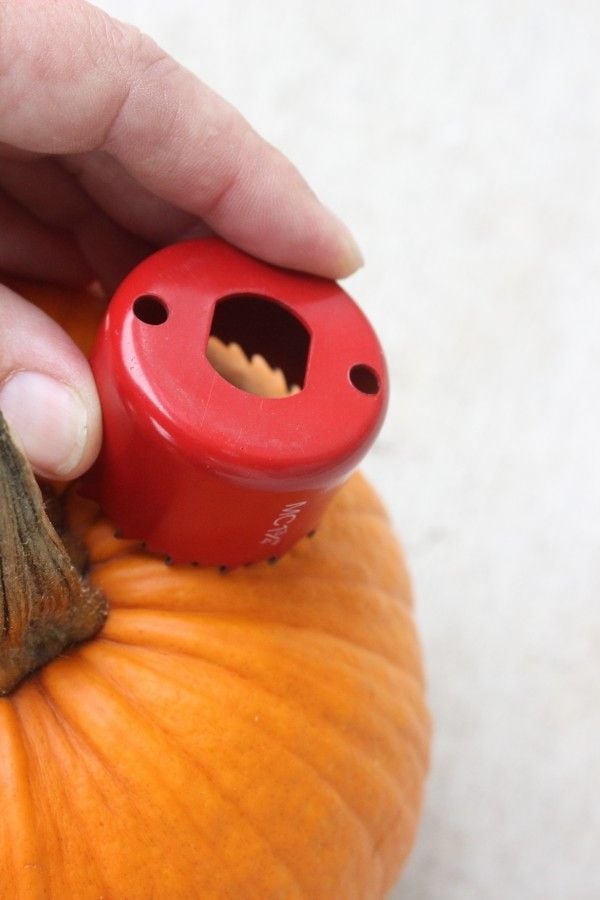 I wanted to drill a hole with it into my pumpkin to insert a solar light. I had a power drill. But, we didn't have the part that attached the circle cutting thingy to the drill. So I put the circle thingy into my purse and headed to the hardware store. I showed the staff member what I had and explained that I needed the part that attached it to the drill.

Fast forward ten minutes later. Three staff members were trying to figure out which part would fit my drill. It was a part that looked like this. 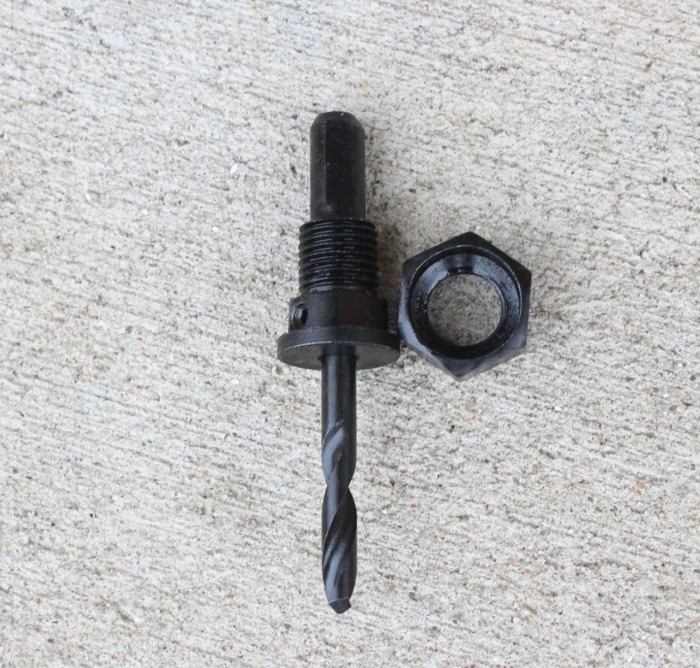 But there were so many options.   And, they were debating the merits of which circle cutting thingy would work the best.

"Would it help you guys if I told you what I'm cutting with it?" I asked.

"Yeah, that would help."

"I'm cutting into a pumpkin,"  I replied.

That's when the guy said he'd had enough and that he was leaving. I came home and shared my story with my family. They thought it was funny and also couldn't figure out what I had done that was so weird!  He had enough!  Yikes, I'd hate to see what he'd do if he had a difficult customer.   I'm just weird 'cause I've given up explaining parts so I bring in pictures, of circle cutter things or IKEA lampshades that I'm trying to convert.  {Sigh}  It's just easier to show them!

Oh well. I ended up buying this set for and it had everything I needed. 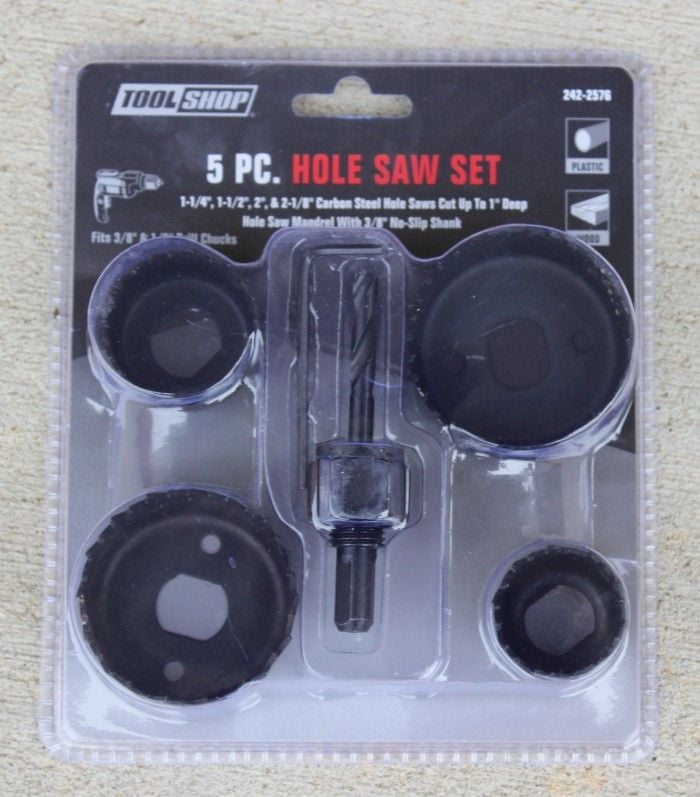 Let me save you from having to do charades at a hardware store.  You can order a hole cutting set from Amazon.

So, let me show you how I turned my pie pumpkin and my $1.00 solar light into a solar Jack-O-Lantern.

Directions on making a solar Jack-O-Lantern. 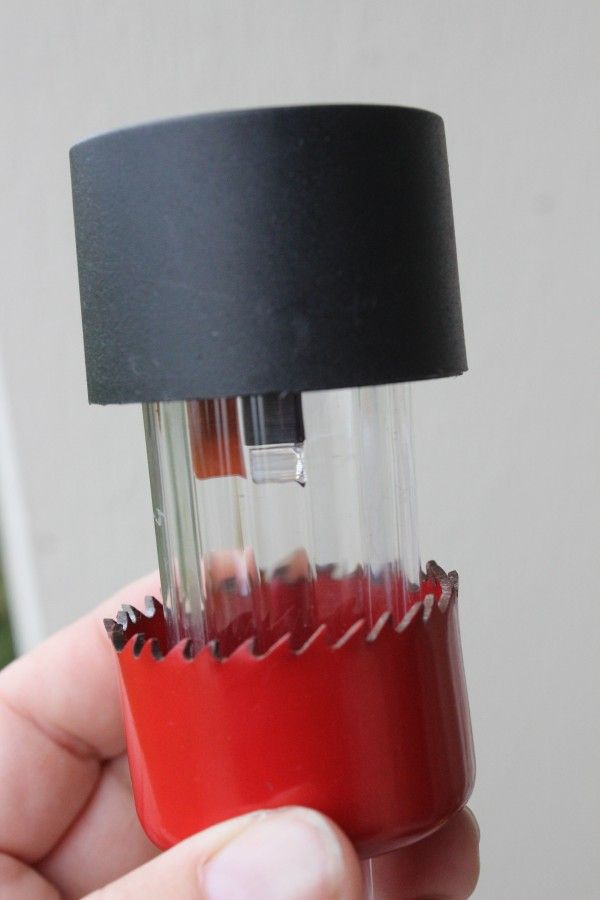 Attach it to the power drill. 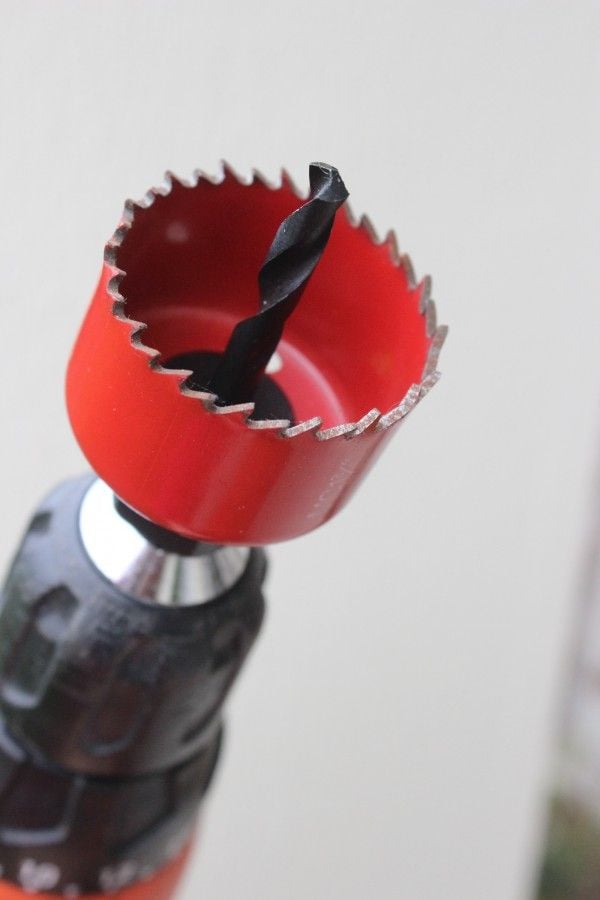 I cut my hole just behind the stem. I wanted to leave the stem on. 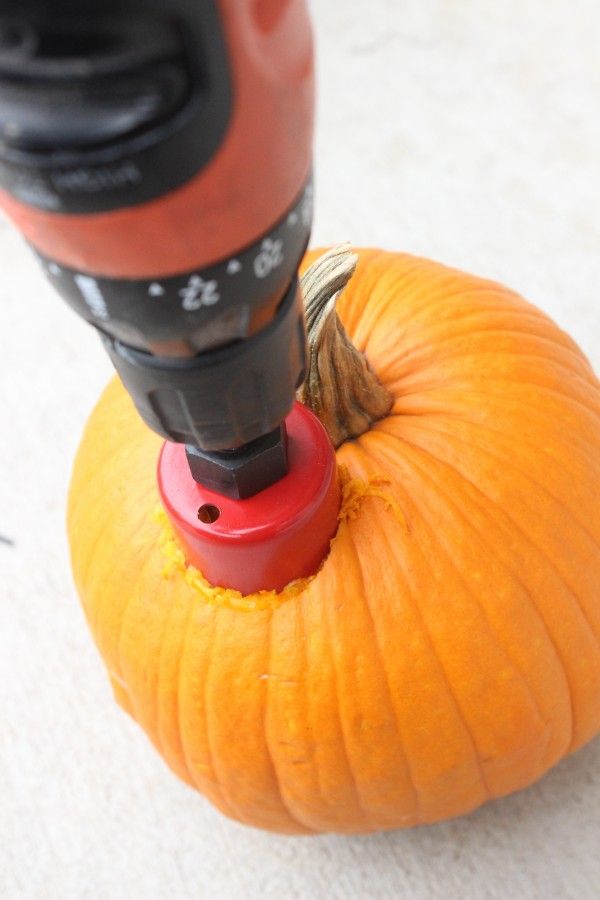 Pull out the pumpkin part from the pumpkin. Good thing I can show you a picture 'cause that sentence isn't a good description of what to do! 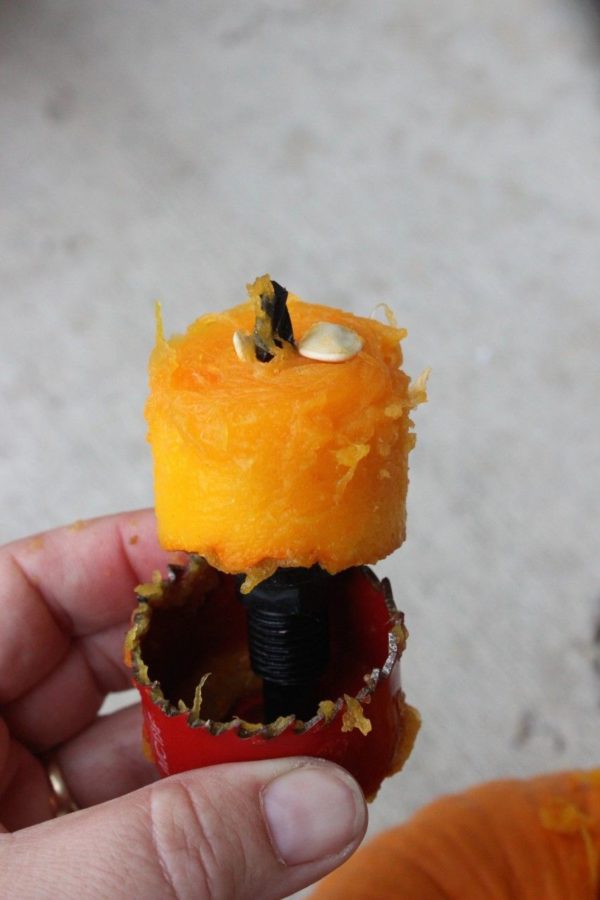 I then switched to a smaller circle cutter. 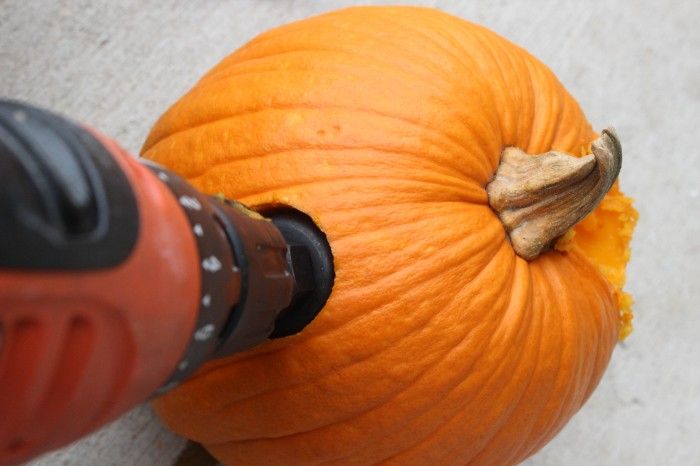 Yes!! I used my drill to cut the eyes out {gasp}. I know!! Well, truth is, I don't have little kids anymore and I don't have to fight with the pumpkin to cut out funny shaped eyes and a weird mouth anymore. Round, cut with a circle cutter is just perfectly fine in my world now!!

I also used it to cut out the mouth. I cut it so there would be jagged 'teeth'. 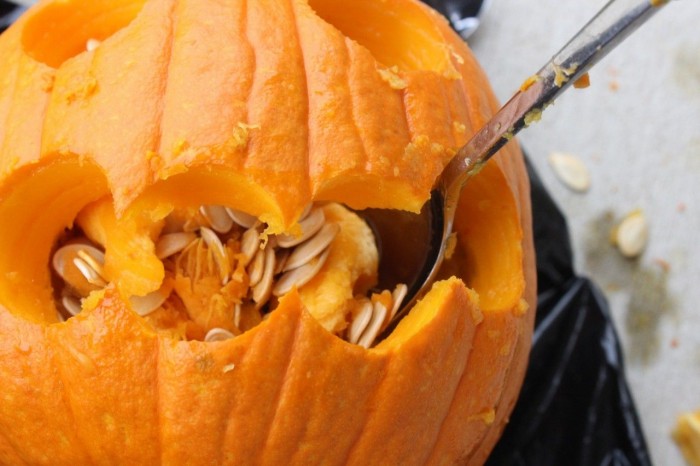 I grabbed a spoon and used it to scrap out the 'pumpkin goo' through the mouth. It worked fine and took less than 5 minutes.

After I scraped the 'goo' I used a small sharp knife and just thinned the ppumpkin around the cut areas. 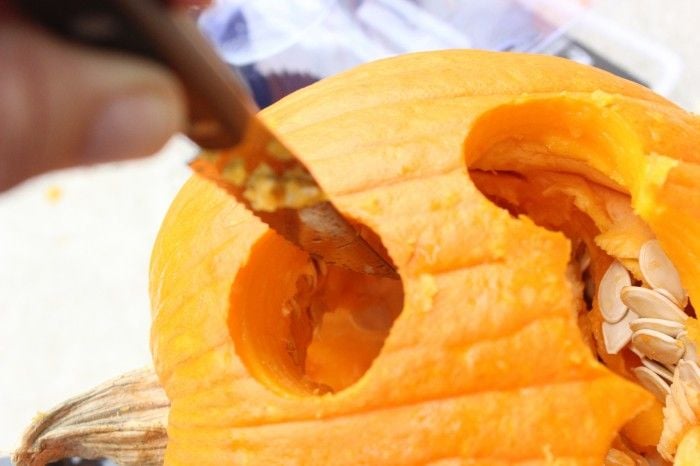 After I cleaned the inside and the edges, I popped the solar light in. 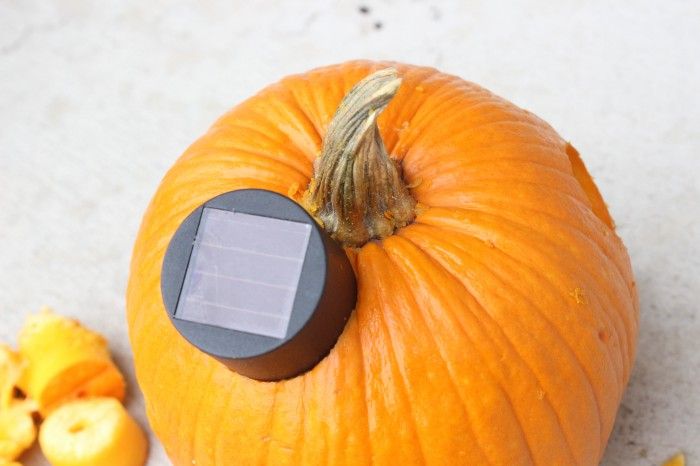 Perfect fit!
Left my newly carved Jack-o-Lantern so that the solar light charging surface was facing the sun for a few hours.

Ta da! Isn't it cute! I was actually quite excited that it worked (not all of my projects do but don't tell)! Those little solar lights give off the right amount of light. 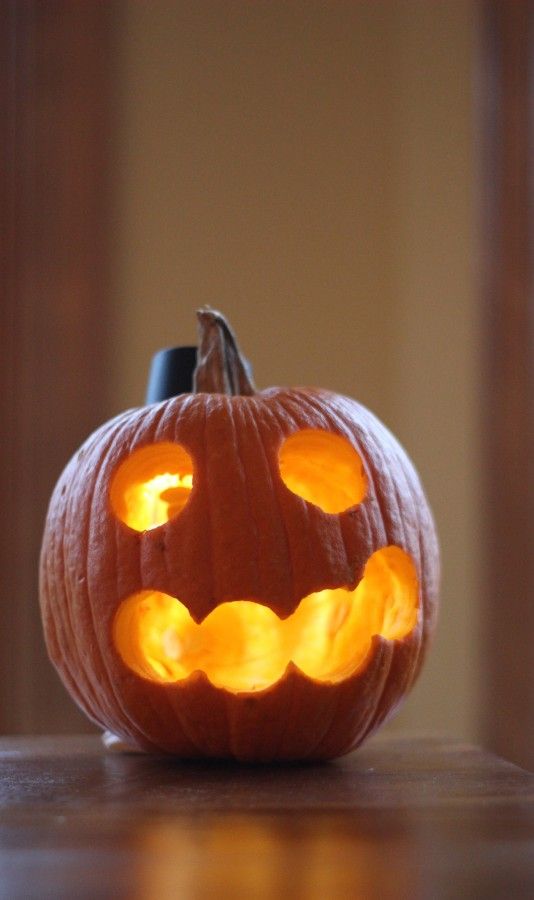 I can leave this out and it should light up at night for a couple of hours. Without worries of a candle or buying the expensive face pumpkins with the electrical cords.