My 100-year-old house had knob and tube wiring

In early 2018, I purchased a house “as is”. It was a house sold through an estate and it had been lived in by three generations of one family. Both the good and the bad news was that it had not been updated. My biggest concern was that it had knob and tube wiring. Everywhere. 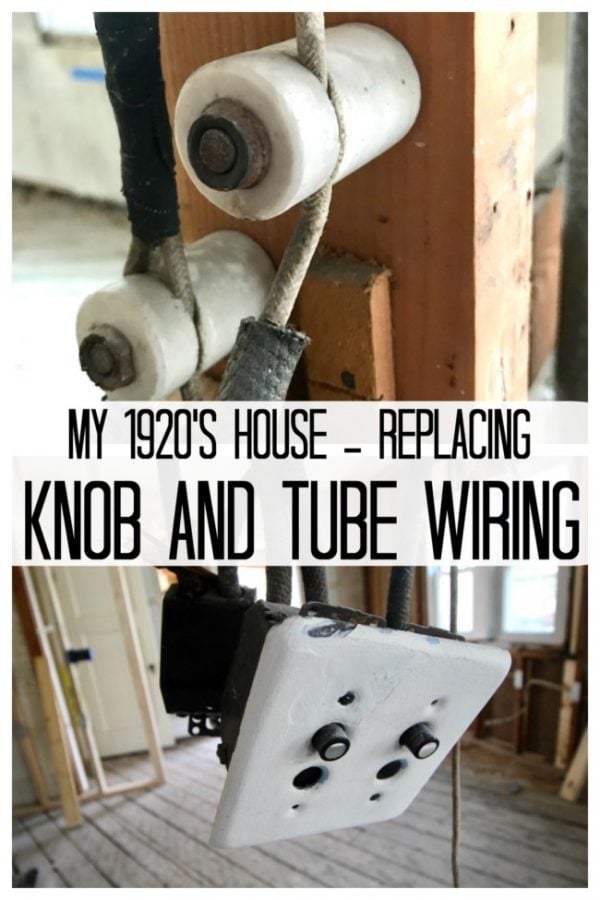 The same wiring that always seems to be a big issue in many HGTV shows (Property Brothers, Love it or List it). In these HGTV shows, they always seemed surprised to find knob and tube wiring, but I sure wasn’t. The sellers, including the real estate agent, were very upfront about some of the issues of the house. And then there was the 64-page inspection report … 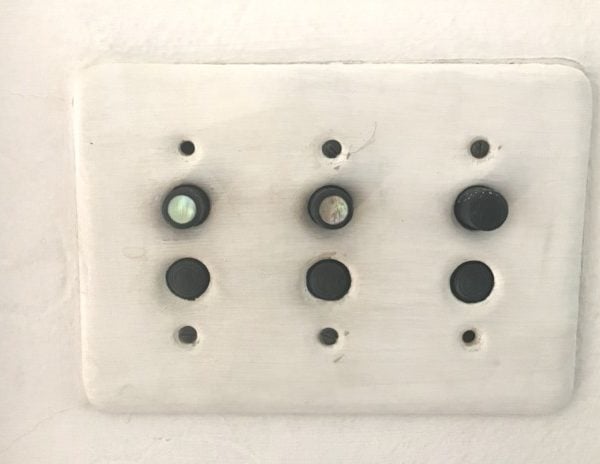 And there were a few DIY projects like the one behind the fridge.  I’m assuming they were DIY projects!    I’m sure an electrician wouldn’t use a power bar to plug-in electrical appliances! 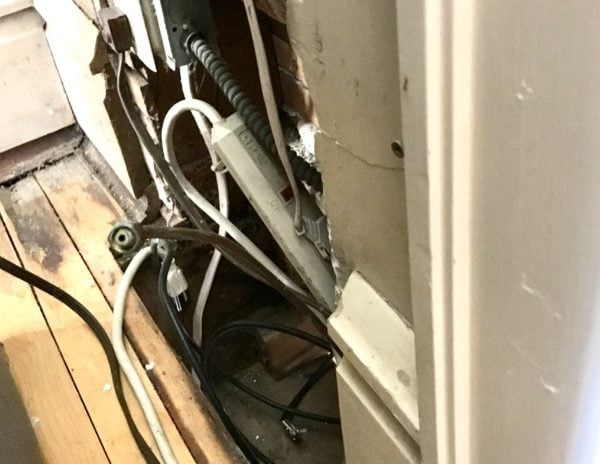 It sure looked a lot better once my electrician installed a proper electrical outlet! 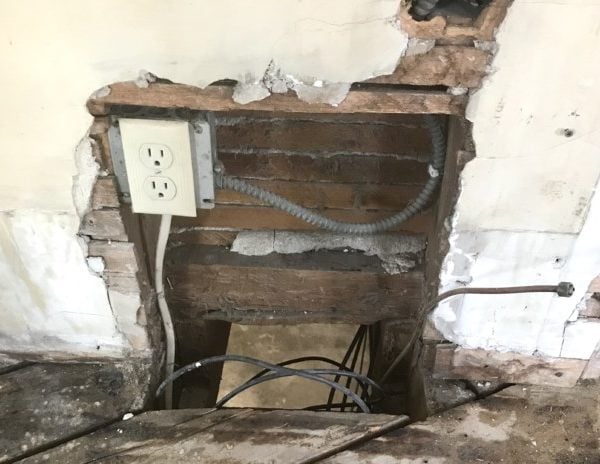 I guess you can see why replacing all the electrical was a huge priority for me!

But, back to the knob and tube. This is what they look like.  The knob is on the left and then there are three tubes. 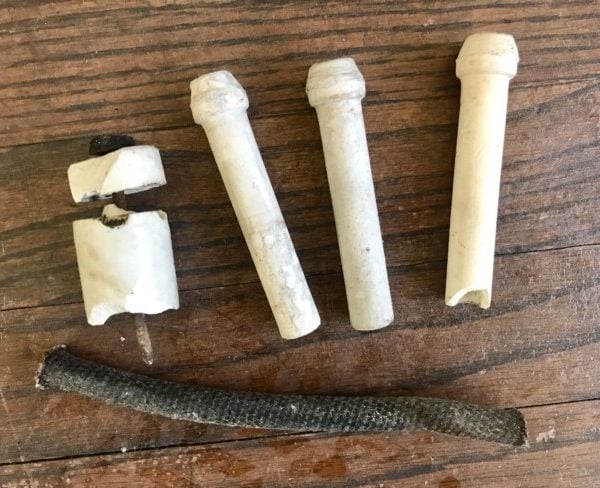 The knobs were nailed into the wood so that they could hold the wires away from the wood. This was so the aluminum wire would be exposed to air so it wouldn’t get hot and start a fire. 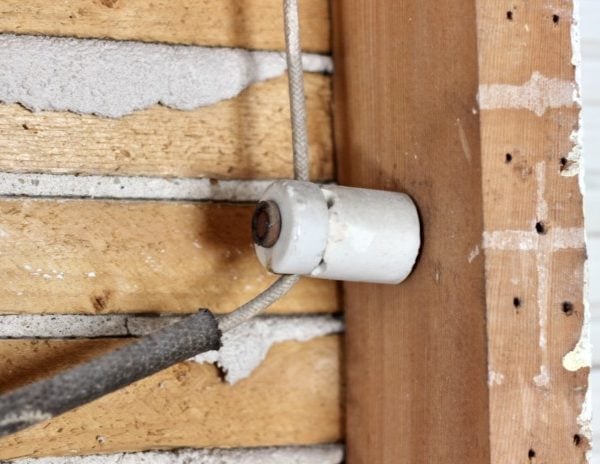 In the picture below, take a look below the knob, and you will see how the tube is used.   The aluminum electrical wire is threaded through the 2 x 4 and the tube insulates the wood from making contact with the wire. 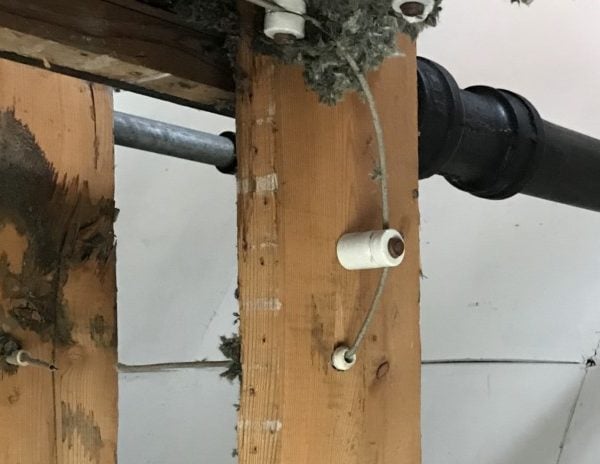 I had my electricians pull out all the old wiring even though it was disconnected.  I didn’t want anyone buying the house (years and years from now) seeing it and thinking there was still live knob and tube.  Sadly, I can’t find the box where I had all the knob and tube stored! 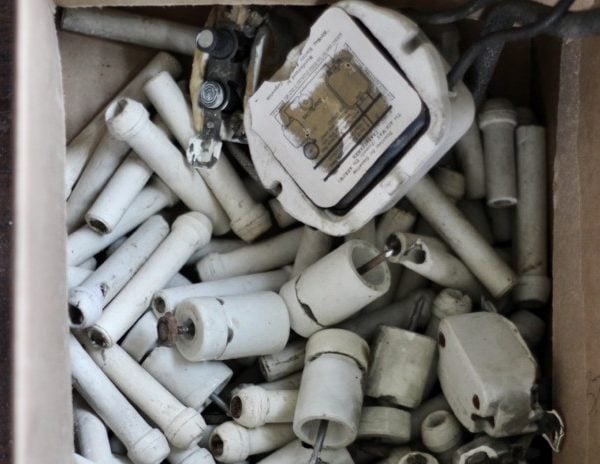 Rewiring the house was my number one priority when I purchased this house.  I even ended up firing my first electrician because he didn’t seem to feel it was as important as I did.

I have a walk-up attic.  One day, when I win the lottery, this is going to be a really fun hang out room.  But not now.

There was a rough wooden floor in the attic but it was removed so that the electricians could replace the wiring in the second story.  I had the choice of taking down the second story ceiling or the attic floor.  So the floor went.   That’s when we discovered that the insulation was not good and the wiring was touching it. 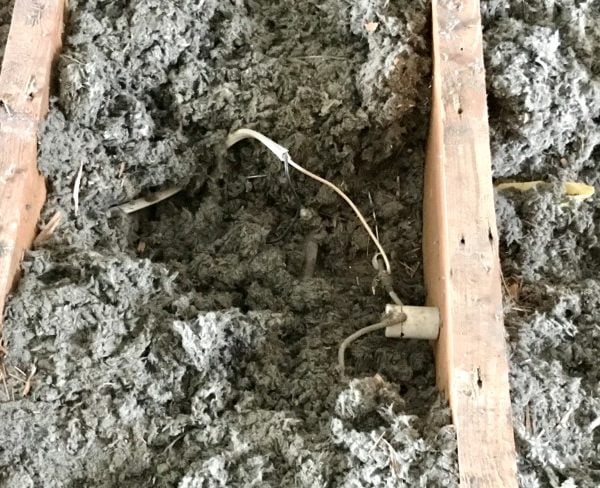 The wiring had also been nibbled on by, I believe, some mice.  So there was exposed wire touching the flammable insulation.  So yes, I was glad I decided to rewire the whole house.  It gave me peace of mind knowing I made the right decision to replace everything especially once I saw what I could have potentially have left in the ceilings.

One of the most exciting things I did was remove a kitchen wall when I did a total kitchen gut and renovation.  If you want to see those details, take a look at my post called, My Kitchen Renovation, I bought a house without a kitchen!

The kitchen had flooded two weeks before someone else was supposed to buy it.  They backed out of the closing and I was able to buy it.

See the wall on the left side of the picture below?  That’s the wall we took out. 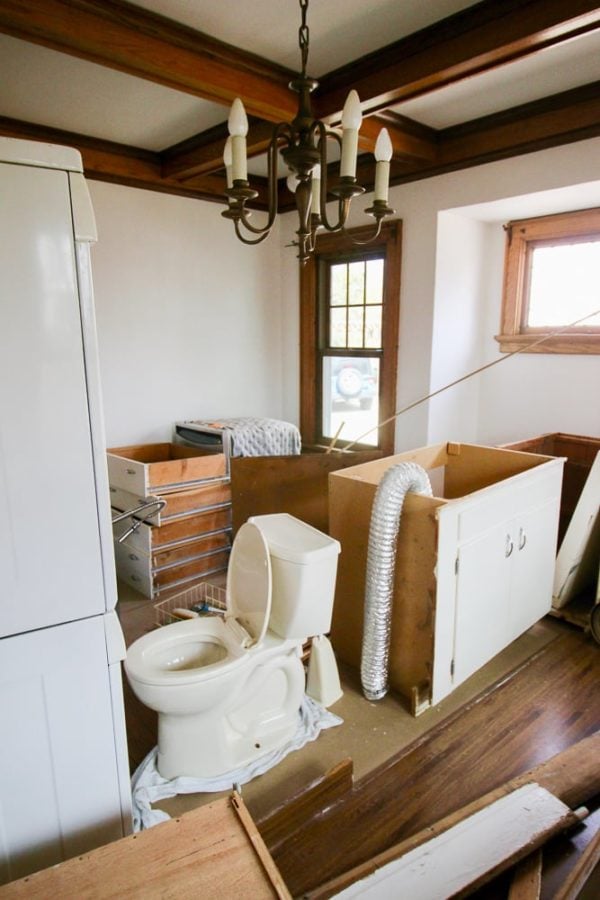 Here’s the wall, down to the studs and the original electrical and plumbing.  Three generations of women in one family stared at a wall when they did the dishes.  I had the kitchen sink moved to under the kitchen window.  It wasn’t cheap to do, but that’s where it was supposed to be! 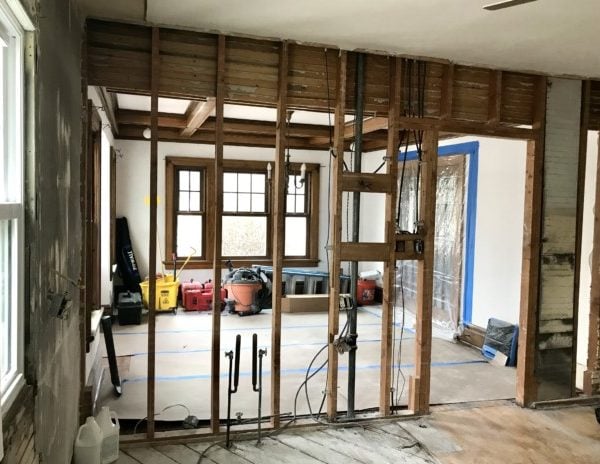 And when the rest of the wall was taken down, the original electrical wires were the last thing removed. 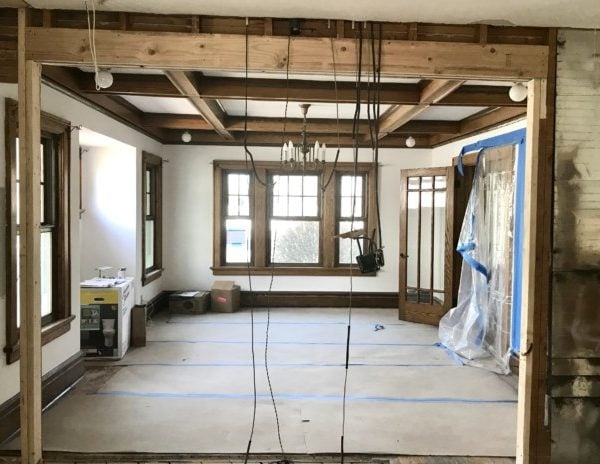 This was a major remodel.  Do you see the new header in the picture above?  I know way more about the internal structure of my home than most people ever would!  Plus I have pictures!

The picture below is my favorite picture of the remodel.  It’s a closeup of the light switches for the kitchen and dining room.  And they were still functioning at the time! 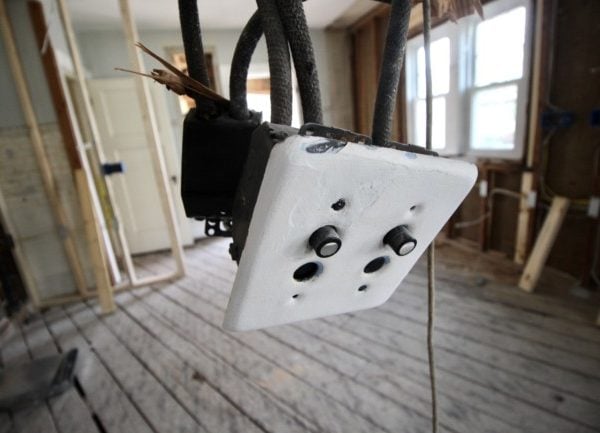 Fortunately for me, I was able to buy new, safe reproductions of the push button switches and the inner workings of these lights.  My electrician insisted I replace the old switches because he didn’t feel the old ones were safe.  But the new ones that were installed on the main floor look the same!  It was a splurge that I was glad I made.

Replacing the electrical in a house is a ton of work.  I also added a few outlets and they had to cut out big holes in the walls so they could figure out what was behind the lathe and plaster so they could put the outlets in the appropriate places.

I sure had a high drywalling bill as part of this project! 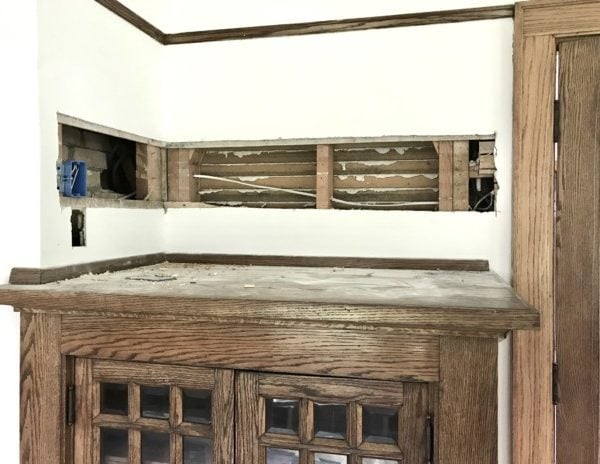 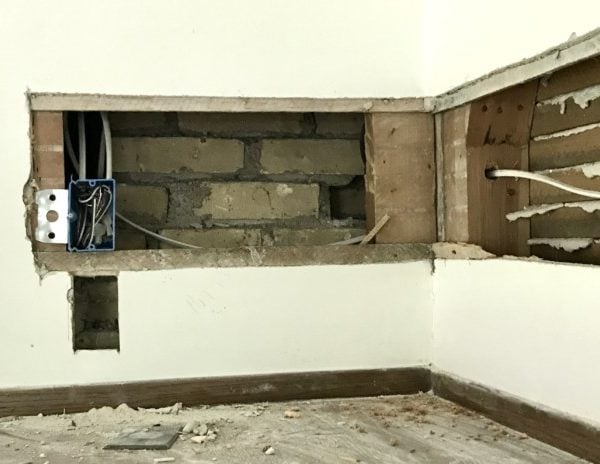 I’m so thankful that I had a great drywalling crew.  They did an amazing job patching up these holes.  You would never know there were holes like this all over my house.  Like over 40 of them!

It was a huge expense rewiring the house but it was the right time to do it.

I also had to gut the one full bathroom in the house and then added one right behind it.  That wall was taken down to allow the electricians and plumbers to do what they needed to do.  Here was the wall after the hall bathroom was removed. 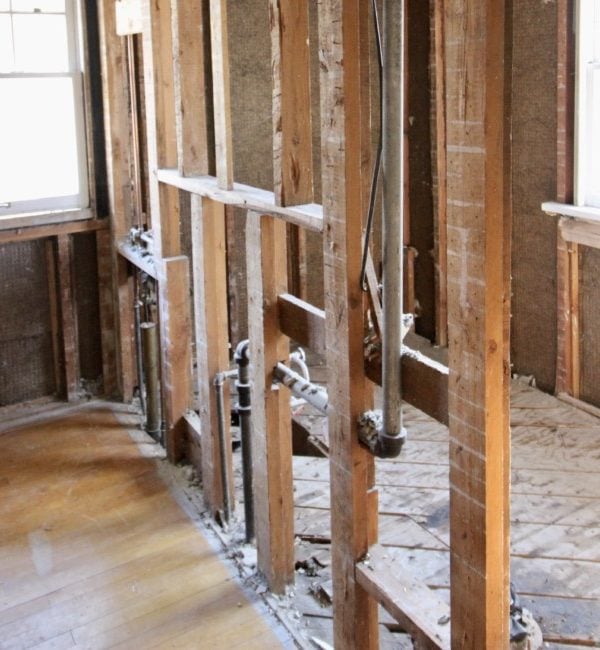 Then the picture below was with the new plumbing and new electrical.  For two bathrooms instead of just the one original.   I do have a post on renovating my hall bathroom if you are interested in reading it.  If you like bathroom remodeling details, take a look at that post. 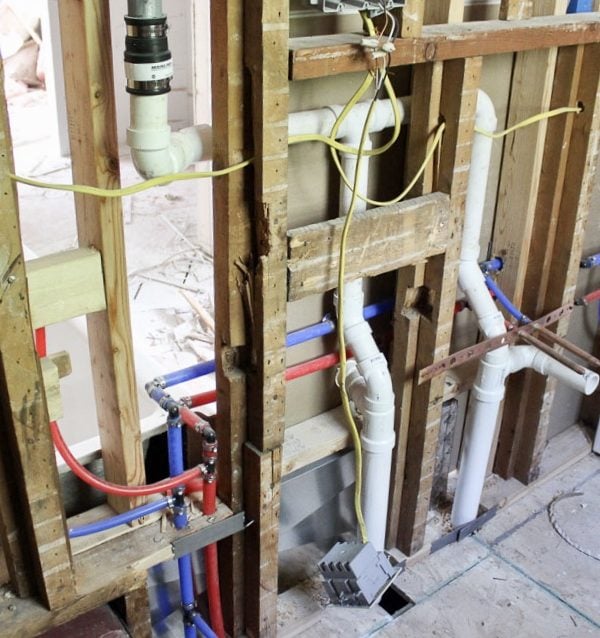 I found the new style of pipes amusing.  You don’t need to be a genius to figure out the red pipes are for hot water and the blue for cold.  And of course, all that new electrical wiring!

Back to the kitchen!  The electricians installed a ton of wiring. 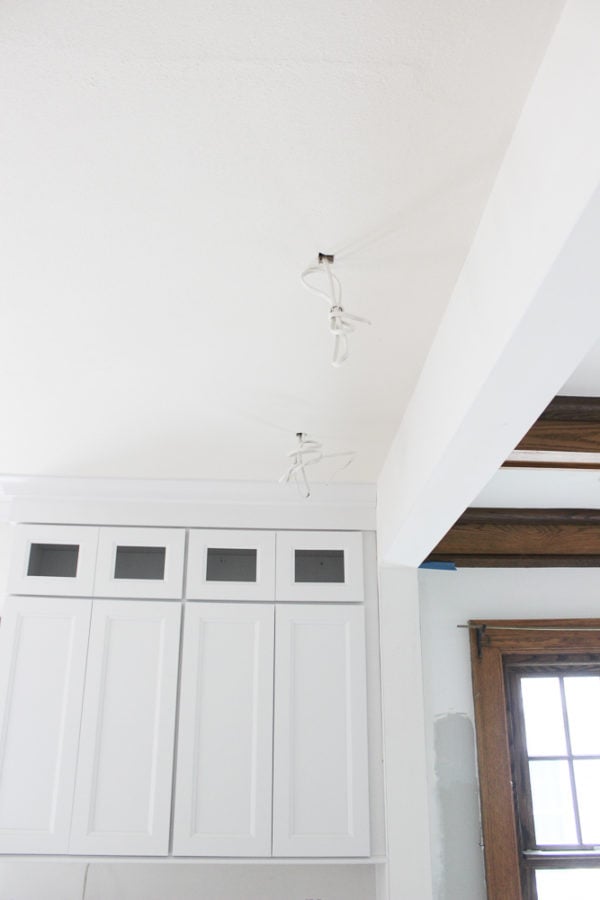 And I was able to install beautiful fixtures like this! 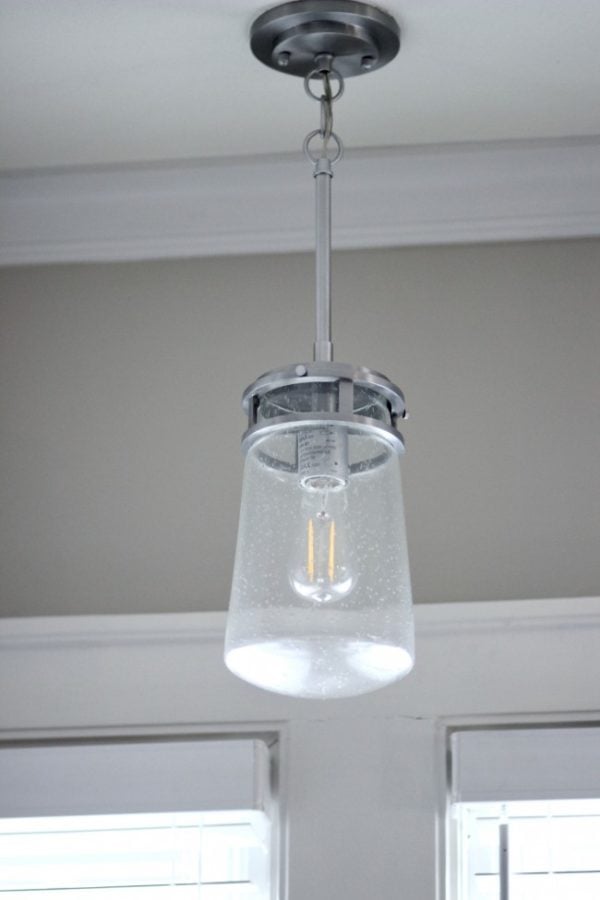 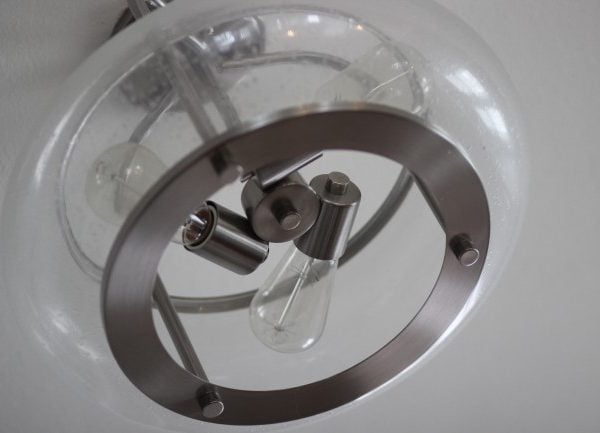 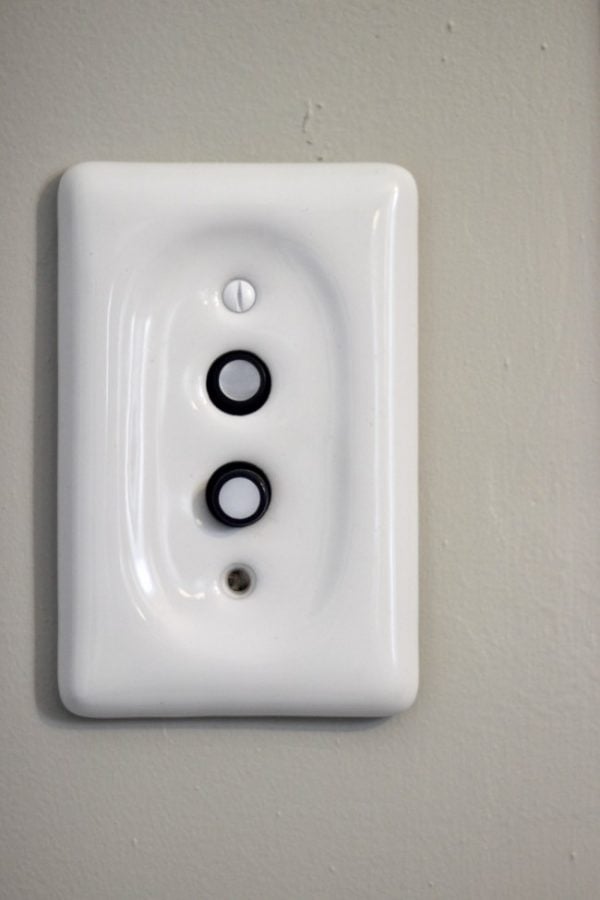 Ooops, I just noticed when I took this picture that the bottom screw was missing.  It isn’t anymore!

My kitchen remodel.  I bought a house without a kitchen. 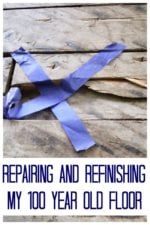 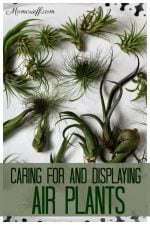 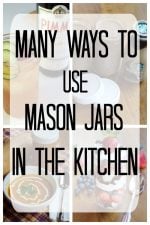 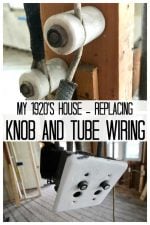 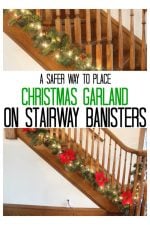