The Paris Catacombs are an unbelievable place. It's been about a year and a half and I still can't believe a place like that exists. That human bones could be piled along the sides of tunnels and you can see and (if you must, but you aren't supposed to) touch them. Six to seven million skulls and femurs piled, often artistically. It is an indescribable feeling, being there. Amongst so many dead. Their bones in piles which have become walls. If you think our Halloween is kind of creepy, wait until you get a chance to experience being amongst so many dead. For real! 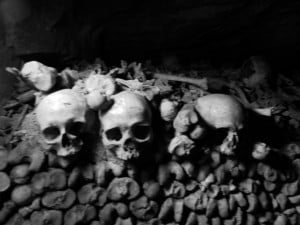 This is now a Paris Museum. It's not one that everyone raves about and my kids actually found out about it searching the internet on what to do in Paris. We took the subway to the entrance and then lined up for 3 hours. If you know my family, lining up and waiting isn't something we are good at. But we did it. And it was worth it.

After you buy your tickets, you go through a tunnel type entrance. There are lots of stairs down. It's roughly a 45 minute walking tour and only 200 people are allowed to be in the catacombs at a time. The brochure tells you:

"The tour is unsuitable for people with heart or respiratory problems, those of a nervous disposition and young children." 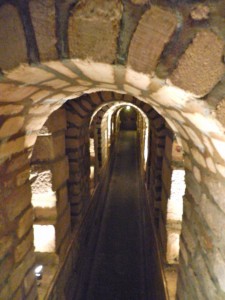 Entrance to the Catacombes.

The Catacombs were needed due to urban spread in a growing Paris. The major cemeteries ended up being in the actual city during this sprawl. The number of burials far outnumbered the resources available. The first cemetery to have been emptied was the cimetière des Innocents graveyard in 1786. Apparently the cemeteries were a risk to public health. Bodies kept being put into overflowing cemeteries. My own personal speculations of the conditions probably shouldn't be shared. 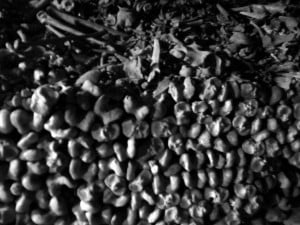 Below Paris, there were major quarries or probably more appropriately described as tunnels. These were created when the stone was mined to build the buildings above ground. Some of this stone was used to build the Notre-Dame Cathedral, and the Louvre.

So, basically, workers went into cemeteries, removed the bones and piled them in the Catacombs. However, it was just the femurs and the skulls that we saw. The rest of the bones are, I believe, piled behind the neat rows and in parts of the Catacombs we are not allowed to see. 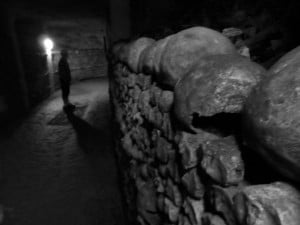 There was some creative bone stacking. 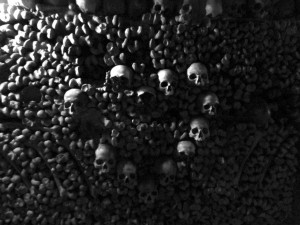 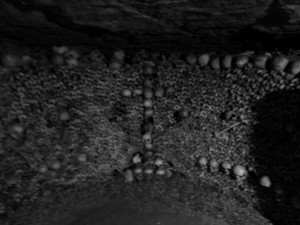 What we thought was sooo incredibly weird was there was no tour guide. No security guards. No glass walls shielding the bones, nothing between you and the skulls and femurs of the Parisians of hundreds of years ago. I think it's part of Europe in general having so much history that it can't all be obsessively guarded like our young history here in the U.S.. The brochure did say that all bags were subject to search upon leaving the Catacombs. I don't remember being searched. And really, there weren't any souvenirs unless you really had to grab a skull of femur. Unfortunately, I'm guessing there are those who would take what isn't theirs.

Some areas were sectioned off and signs explained where the bones came from. 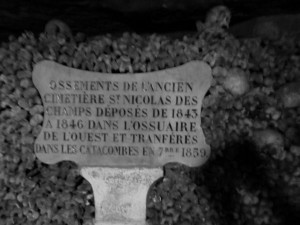 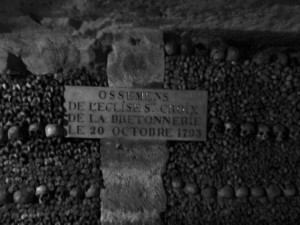 If you do go to Paris, go see this! It's a little off the beaten path but it's an amazing thing to see and experience. Another little amazing tidbit. This area was actually 'lost' for many years. Only to be rediscovered when the Paris subway was being built. Bet some subway workers got the surprise of their lives when they saw all the bones piled neatly. And they had no idea what they would discover.

As an fyi, all the pictures in this post are mine. The quality of them isn't great but I did follow the request that we don't use photo flash.