Refrigerator pickles are pickles (or cucumbers) that are put into brine and are NOT canned or processed.   They are put into a brine which is a seasoned mixture of vinegar and salt (in specific proportions). The cucumber slices or spears take on the flavor of the brine in a couple of days.  I think of these as a mix of marinated and pickled. These are super easy to make, use up excess cucumbers you have (yes you can use full-sized ones, plus you get to reuse a jar full of delicious pickle brine)! 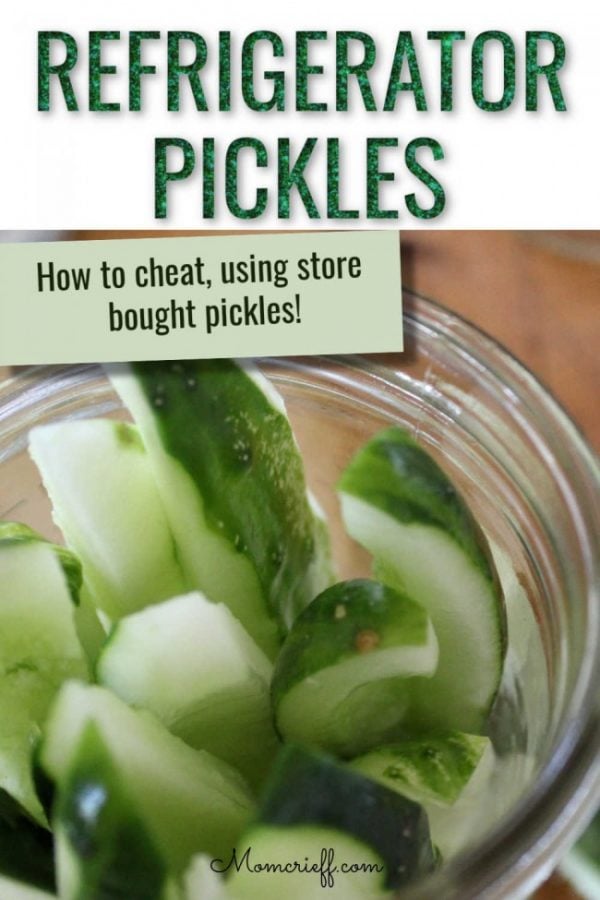 I LOVE the taste of Clausen pickles! They are purchased in the refrigerated section in the grocery store. So, I guess they are already refrigerator pickles? It's the flavor that I like and that's why I tend to have this on hand and then reuse the brine to make refrigerator pickles or to marinade vegetables. 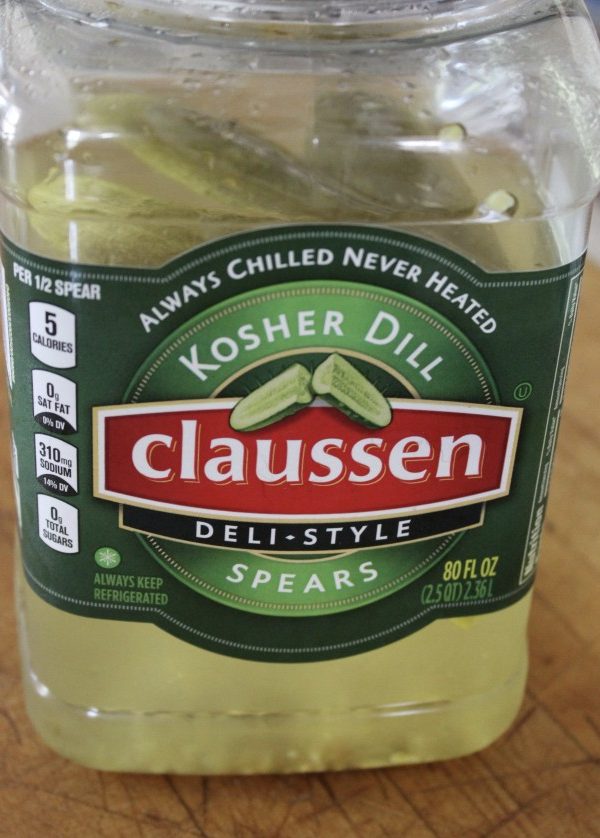 Extra garden cucumbers (or if you are like me, extra Costco from Costo, or your garden in late summer/early fall)
Jars (You can reuse the original pickle jar, or canning jars)
Brine from store-bought pickles.

I usually partially peel my cucumbers because I like the striped effect. If using English cucumbers (burpless cucumbers) it is not as necessary to take the skin off nor to take the seeds out (since the skin is not as tough and there are fewer seeds.

Seeds are easy to remove, just cut in half lengthwise and scoop out the seeds. 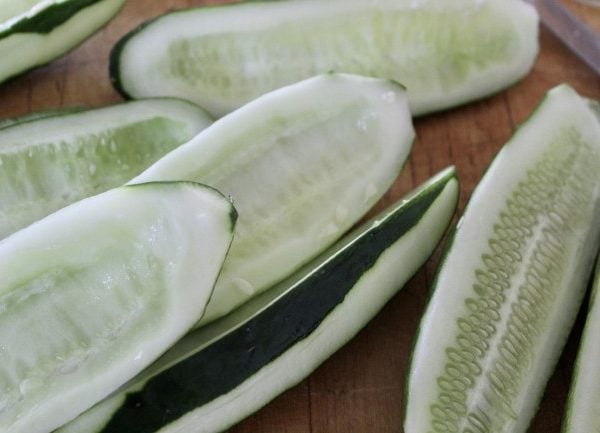 Fill the jar with the store-bought pickle brine (or as we call it, pickle juice). Make sure you add some of the good stuff, like the garlic, onions, peppercorns or dill you find in the original jar.  Sometimes I add a splash of fresh vinegar, a clove or two of fresh garlic and some sliced onions. 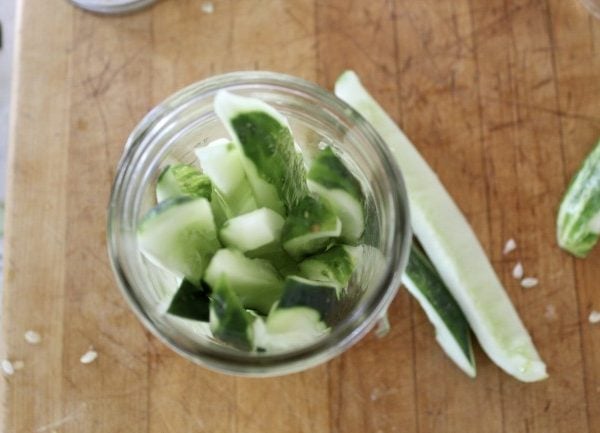 Fill the jar with the store-bought pickle brine (or as we call it, pickle juice). Make sure you add some of the good stuff, like the garlic, peppercorns or dill you find in the original jar. 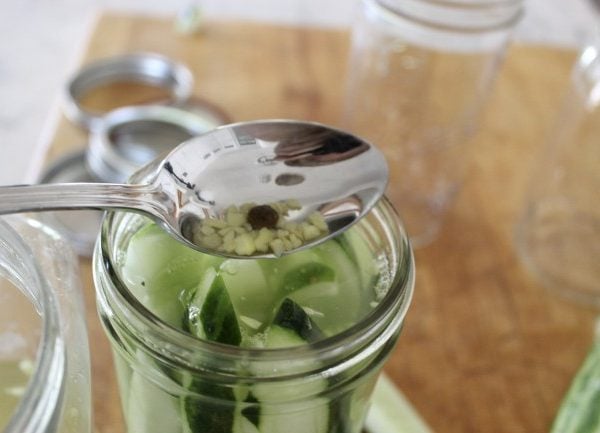 Once you have the jars filled, put a lid on and you are almost done! 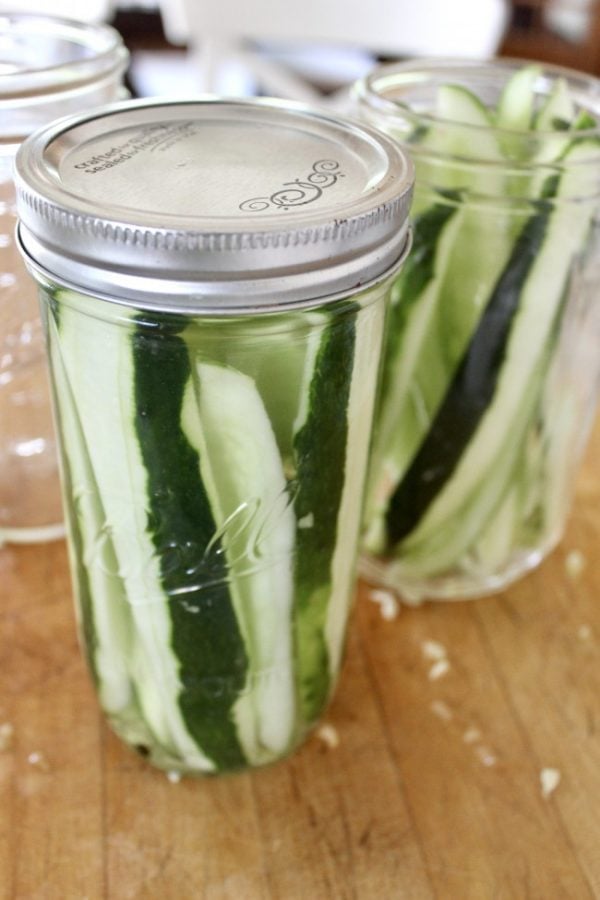 A little hint.  I always put them into the fridge upside down for the first day and then turn them right side up after that.  If we have these in the fridge longer than a few days, I will occasionally turn the jar upside down so that the bottom gets immersed in the brine.

How long do these last?

I've never really had any left for longer than a couple of weeks. We eat them as snacks, or in place of pickles, and I even like them as a veggie side if I'm having burgers or brats. They are kind of like marinated cucumbers (they absolutely count as a veggie!)

Since these refrigerator pickles | cucumbers are NOT processed, they are not intended to be stored long term. Use common sense. Keep them for a few weeks. If they get mushy or look odd, it's time to toss them! This is a great way to reuse leftover pickle juice and extra produce.  You already gave them a second chance to get eaten by doing this!

What should you be careful of when reusing pickle brine?

I will only use it to make two batches of refrigerator pickles.
If the brine gets cloudy or shows any sign of spoilage, do not eat the contents of the jar.

DO NOT can a new batch of pickles with used brine. It probably does not have the correct ratio of vinegar and salt.

How else to reuse pickle brine

I love making creamy dill pickle pasta salad. Leftover brine is one of the ingredients!
Use for other vegetables like marinated cauliflower.
I haven't done it yet, but if I have extra from my garden, I will reuse pickle brine to marinade green beans or carrots. I know people also do this with beets.
Use in homemade salad dressings. Substitute a few teaspoons of brine for part of the vinegar or lemon juice in the recipe. This is wonderful on potatoes used in potato salad.
Works well as an ingredient as a flavorful meat marinade. Substitute some of the vinegar in your marinade.
Add some brine liquid into veggie or chip dips
Even if you aren't reusing your brine, keep a small jar for a dirty martini or a bloody Mary.

Some people like to print and store recipes as reminders of recipes they want to try. So, here it is! 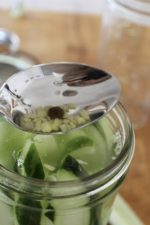 Jar and brine from store-bought pickles

Cucumbers or pickles (I peel and will remove seeds from regular cucumbers.  Not necessary for English cucumbers - aka burpless cucumbers) 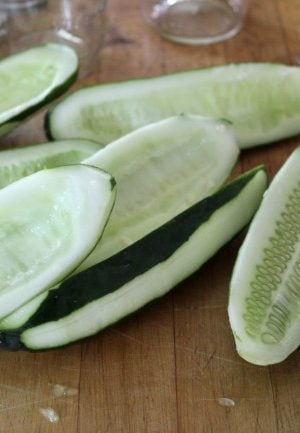 Cut cucumbers into spears or coins.

Fill jar with either cucumber spears or cut into coins. 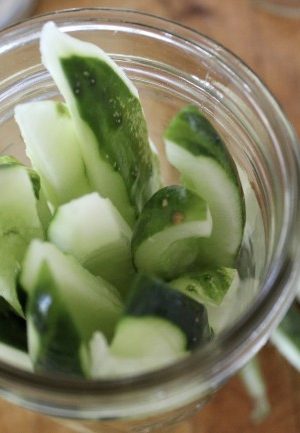 Add as much brine from the storebought pickles as you can.

Put a lid on the jar. 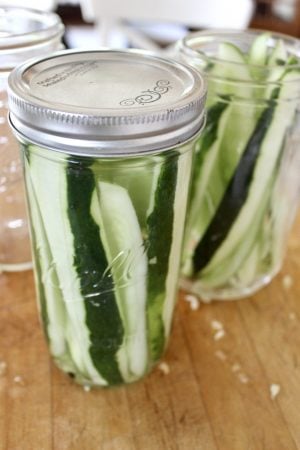 Refrigerate for two days then enjoy!

I would keep these for only 3-4 weeks.  They are not processed (canned) so must be refrigerated until eaten.

Like this idea? You can do something very similar with marinated/pickled cauliflower! I love that too!

Too much zucchini?  Here is an easy way to grill zucchini!  Doesn't get quicker, easier or more delicious to prepare zucchini this way.

« Get the ironstone look with thrift store finds
How I use solar lights outdoors. »
66 shares