Thought I'd share this again - from 2013. Seems very appropriate today! 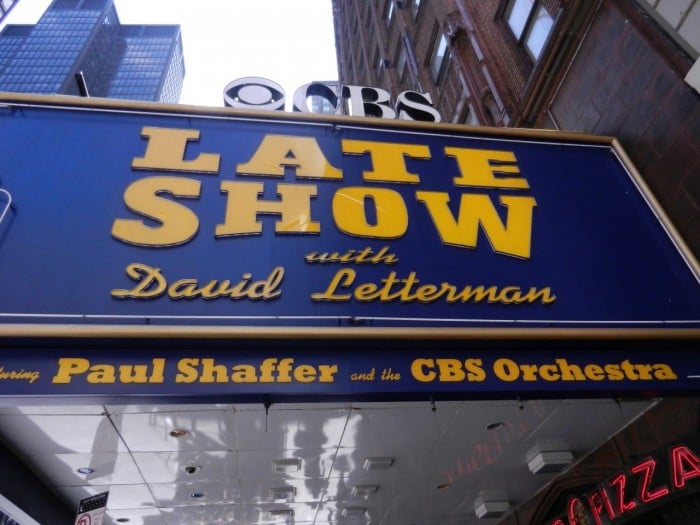 Oh yes, I was in the live studio audience! Thanks to my hubby who was organized and preplanned most of our trip months ago. We were there! We were going to see the taping of David Letterman on Tuesday April 2nd. The taping happened at 4:30pm and would be shown on T.V. later that night.

So, we received a phone call the Thursday prior to our trip. We were told to come to The Ed Sullivan theatre between 2-2:30p.m.. Stood outside in line and it was freezing. Was given a form to fill out to include any crazy pet tricks we have. Ummmmm, my cat knocks any cup of water over. But not always on demand so we didn't fill out the form. For a second I thought about it but wasn't keen on the idea of transporting my cat on a plane back and forth to New York. We don't enjoy the 5 minute trip to the vet.

The line started to move and we were called forward to go to the door where we were checked off on "Ron's gold list" - had to show I.D.. Got our tickets then went further into the theatre to the counter. They wrote an 'A' on the back of our tickets. We didn't know what it meant but we were hopeful the 'A' meant something good. A group of us with 'A's' on our tickets were told to be energetic and to think of some questions for Dave. 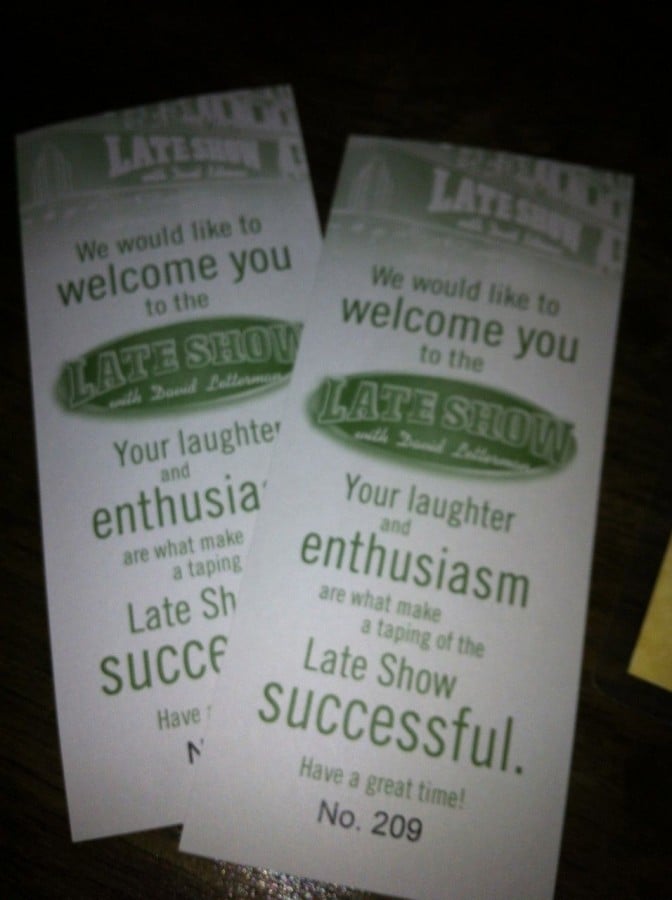 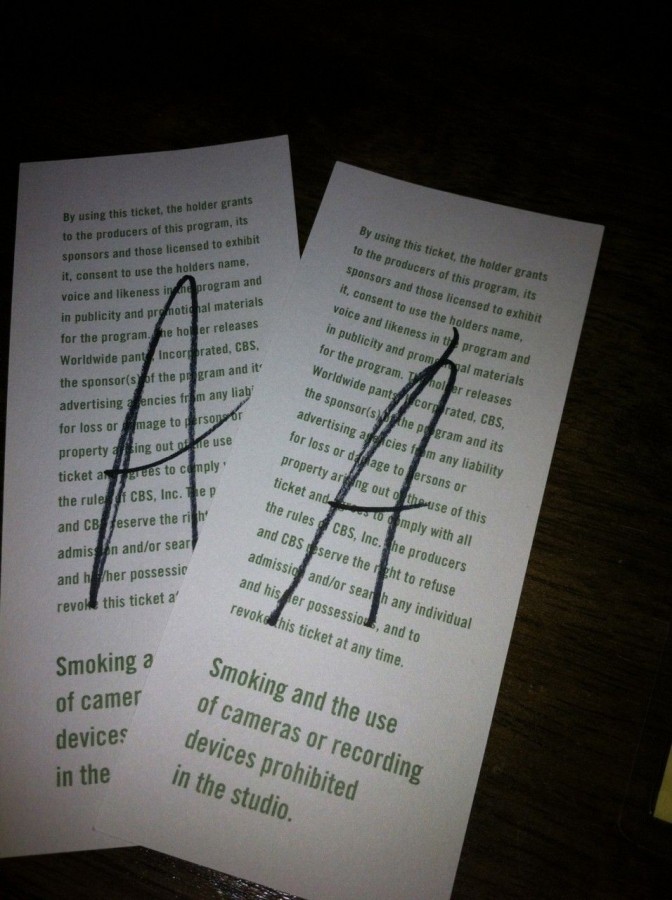 We were hoping the 'A' on the back of the tickets meant something good!

We were told we could go around the corner to a bar called The Three Monkeys but be back by 3:20 sharp and line up again out front. I used the rest room there - unisex. Sorry probably T.M.I. here but the restroom had a urinal with ice cubes in there. Guess that's normal? Got to give those guys something other than Cheerios to aim for??

So it almost 3:20 and it was time to go stand in line again. Still freezing outside but the Ed Sullivan theatre pages were good enough to move us into the line inside within a few minutes. Not an adventure for the claustrophobic though. The pages entertained us and informed us about what to expect and what was expected of us. No laugh track on the Dave Letterman show. That was us! We were told more than once to laugh at the joke and think about it later. We even practiced our audience laugh. Those of you who know my hubby surely realized he wasn't a good participant at our audience participation practice :).

After a few minutes we were allowed into the Ed Sullivan Theatre. Sorry, no pictures were allowed or I would have taken some (The last time I took a picture when I wasn't supposed to, a Pentagon guard with a machine gun made me delete my pic's in front of him. Lesson learned!). How to embarrass your 8th grader on an 8th grade trip!

We took our seats. The CBS band was amazing! Paul Shaffer is funny! Bet you didn't realize the main part of their job was to entertain the studio audience. The folks at the Letterman Show sure had everything figured it out. Keep the studio audience comfortable and entertained and they will laugh, clap and be enthusiastic for the show. It's a big audience. We were told about 470 people. Oh, and the 'A' on the back of our tickets just meant the main floor level (vs the second level). Not as exciting as we had hoped. But, we were just off center in row 7. Awesome spot with a great view.

The main guest was Regis Philbin. We were a little disappointed that it wasn't someone a little more exciting. But, it worked out well. Regis and Dave (note, I'm on a first name basis now) played off each other so well. They were truly funny! Didn't have to laugh first then think about the joke later. However, the top ten list was about Justin Bieber and his monkey issues at the German airport. Not the funniest topic in my books but Dave made it funny.

The other main guest was the cast of Cinderella. It was amusing to see that they literally came from a building across the street and right into the theatre on the stage. We could see them walking over from our seats. They were so beautiful!! The cast danced and sang beautifully. Previously, I had no interest in seeing Cinderella but now I do! Did I mention the dresses were beautiful and the dancers so pretty and graceful? And we were in the 7th row. Wow! The scene of the cast dancing across the stage, literally a few feet in front of me, will be imprinted on my brain forever.

Reality was harsh and fast! The dancers finished, Dave thanked them and told the audience where Cinderella was playing and wished everyone a good night. Including us. The music stopped, the lights turned on and we had to adjust our psyche that we were back in the real world. Oh it was a harsh leap back to reality.

Thank you Dave for making the studio audience adventure so awesome! You were amazing! We didn't need prompters to make us laugh. Your smile, your laughter and quick one liners were all we needed. Loved seeing you Dave! Loved you too Regis! Good bye to you too and have a good night.