I mentioned previously that I was going to give my planters a haircut.  In the 13 years I've been blogging, I've never had so many people respond and ask me to share how I do that.  As I was pruning back the annuals in my planters, I realized that basically, I was doing two main things.  One was to deadhead geraniums aggressively, and the other was pinching back petunia plants (a lot!).

Why I pinch back petunias

There is a point in the summer where I get tired of and even annoyed at my planters. They look unruly and unkempt. My planters don't seem to appreciate the amount of work that I put into keeping them look nice (yes, I take that personally!).

It's a normal part of my day to deadhead my planters and remove any yellowing or dried leaves.  Sometimes they need a little more!

This planter is freshly pruned.  When I started, you almost couldn't see the pot! 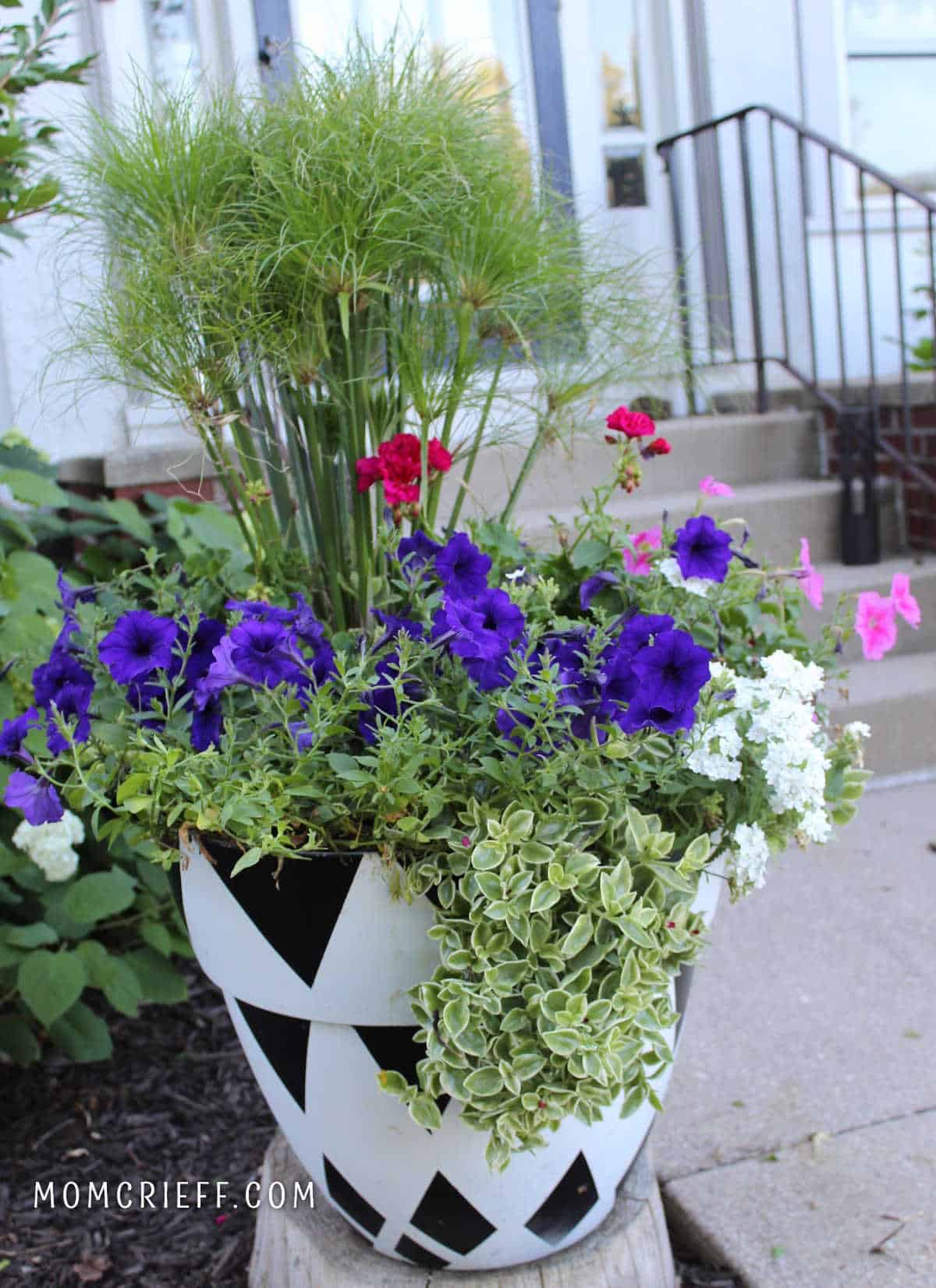 In my weekly email, I described my flower containers as needing a trim. Because they looked like they had bedhead! A week later, I still think it's the best analogy! The stems get long and are full of spent flowers. The new blooms of the petunia flowers are on a long and leggy stem with a little flower on the end. Years ago, I adopted a philosophy in gardening that either the plant/landscaping/tree will improve with some aggressive intervention or it will die. Honestly, I got to a point where I didn't care if the plant died. It was a choice the plant had to make!

Usually, my planters get a heavy summer pruning in the middle of the summer when it's still hot. It's too early to change them over to fall but they don't look great. Here are the three main steps to getting your planters under control.

1. Water heavily a few hours before. The plant needs to be strong because heavy pruning is hard on the plant.
2. Do the deadheading, shaping and pruning. I've supplied pictures and advice below. Please note, this is all information from how I personally do this.
3. After you have completed the pruning, give each planter some diluted fertilizer. I usually make sure my soil is already moist so the fertilizer doesn't run through. For flowering planters, I only use this Miracle Grow Bloom fertilizer.

My thoughts on fertilizing is to fertilize every week to 10ish days. I water down the fertilizer from the manufacturer's suggestion because I think it's important to fertilize more often so the plants regularly get their nutrients. The potting soil's nutrients do get depleted by the plants!  Even if you buy the best potting soil you can get.

When you do a heavy deadhead/prune, please give the plant some time to recover. It will look better in a week but it will look much better in two. I get emails with pictures of dead-looking plants on Thursdays and folks want it to look great by Saturday. Your only option for that to happen is to buy a new plant (sorry).

Did you know that when you snip off the long stem, new growth appears and that helps create newer bushier growth? It makes the plants fuller and it extends and makes the flowering season prettier and longer.  But give the plant time to grow those blooms!

How to fix leggy petunias

You can't fix those leggy stems (gasp!). But you can help the plant grow fuller and look good again. Yes many petunias, especially wave petunias are more maintenance-free and don't require you to deadhead petunias. But, they keep growing longer and longer and the new growth with the new blooms are at the very end of the long stem. All the spent petunia flowers with their faded blooms and wilted flowers get cut off with a good pruning.  Let me show you step by step what I look for and then I'll tell you what I do.  This is what the planter looked like at the end of July.  It's actually not too bad because we've been getting some rain and some cooler days to break the heat.  But, the planter is getting messy and some of the plants (hey petunias!) are looking a little overgrown. 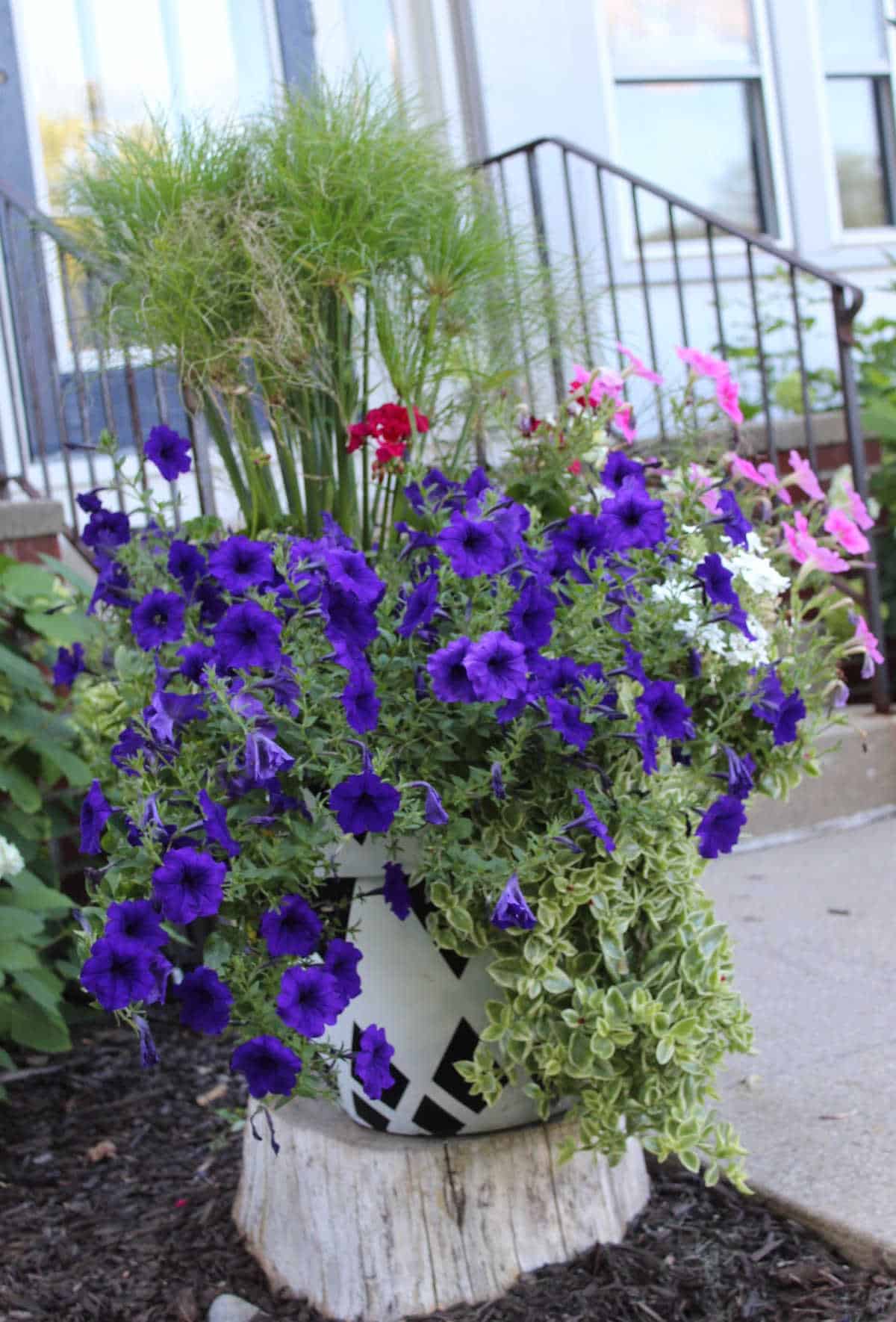 I like using these little pruning shears. They are inexpensive and allow you to do some very accurate trimming.  I actually have a few tucked away around my yard.

DO NOT just randomly start cutting flowers and stems. You do not want straight lines or trim like a hedge. Going back to the haircut analogy, you don't want to cut your bangs just straight across. Or even worse have a bowl cut. Don't embarrass your poor planter or hanging basket with a bad trim!  Start with a plan. 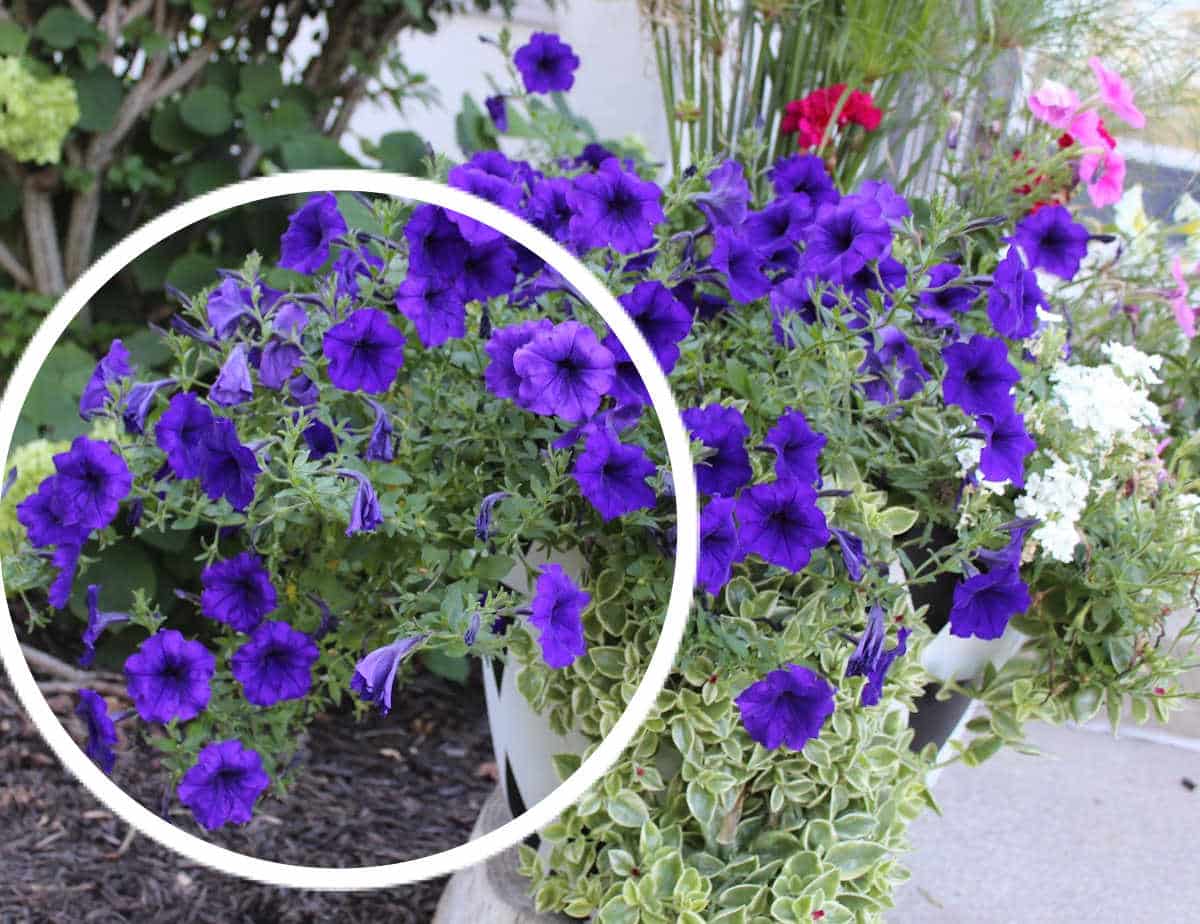 Do you see how far these circled petunias have reached from the pot?  They stuck out over a foot.  It looks messy to me!  When I prune the leggy petunias, I vary the length of each stem. The petunias I pruned back yesterday ended up being between 6 to 10 inches long from where they are rooted in the pot.  Some pieces that I cut off were over a foot long! I trimmed most but left this one to show you how long it is (picture below).

Just an FYI, I do try to always buy wave petunias because they are low-maintenance and self-cleaning.  The thought of deadheading all my petunias is not pleasant (so I spend the extra money for the wave petunias).

The circled plant, below, is one plant.  And it's sooo heavy!   The plant is called an Ice Plant (Dorotheanthus Bellidiformis).  It has little red flowers right now.   I'm actually going to try to root the cuttings and see how it does as an indoor hanging plant.  I would love to have it inside year round! 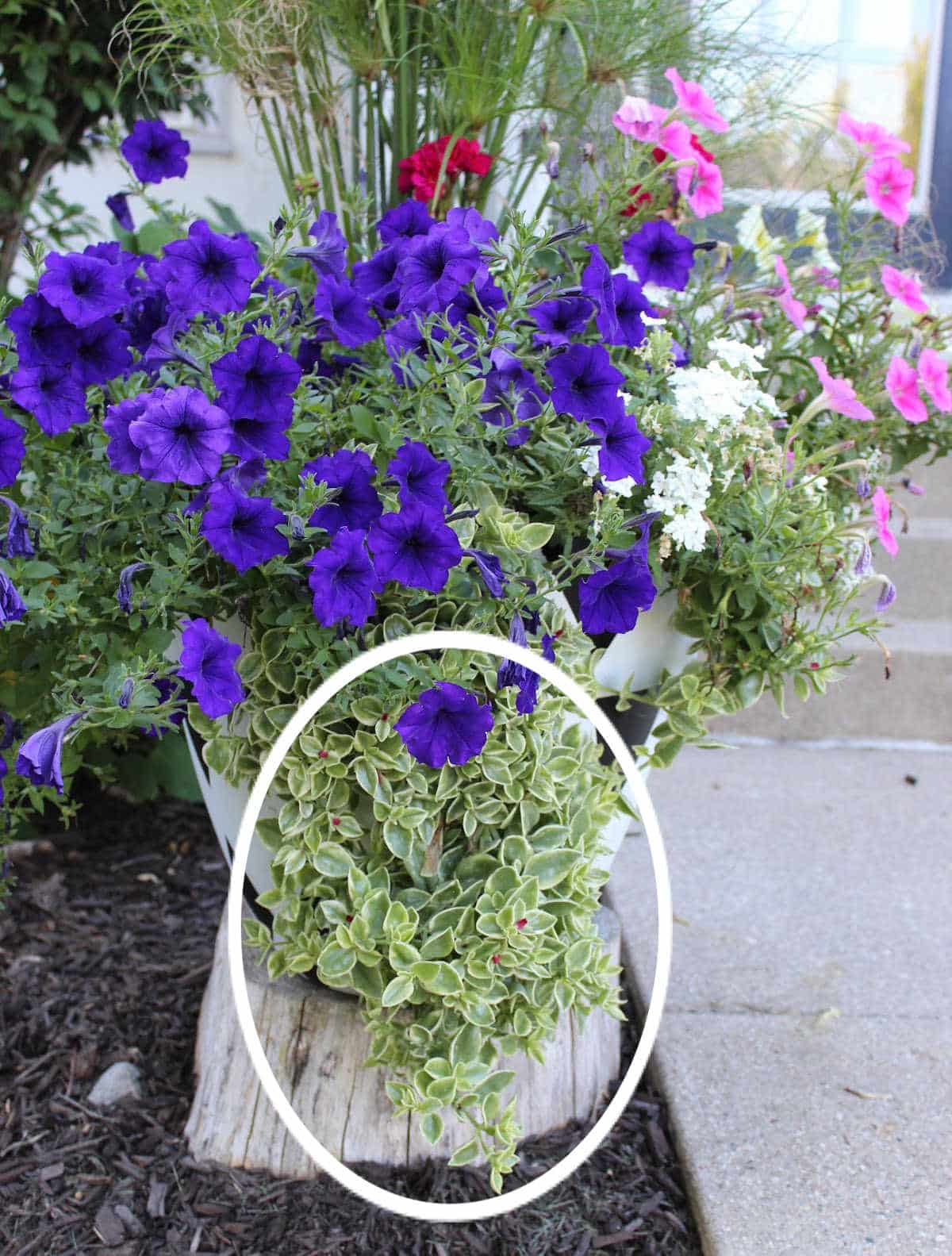 I also look for plants that are dry/yellow or look unhealthy.  In this case, some of the King Tut grasses (that I've circled) were dry and brown.  I find that distracting in the summer.  In the fall, it's OK because I like the dried whispy look then. 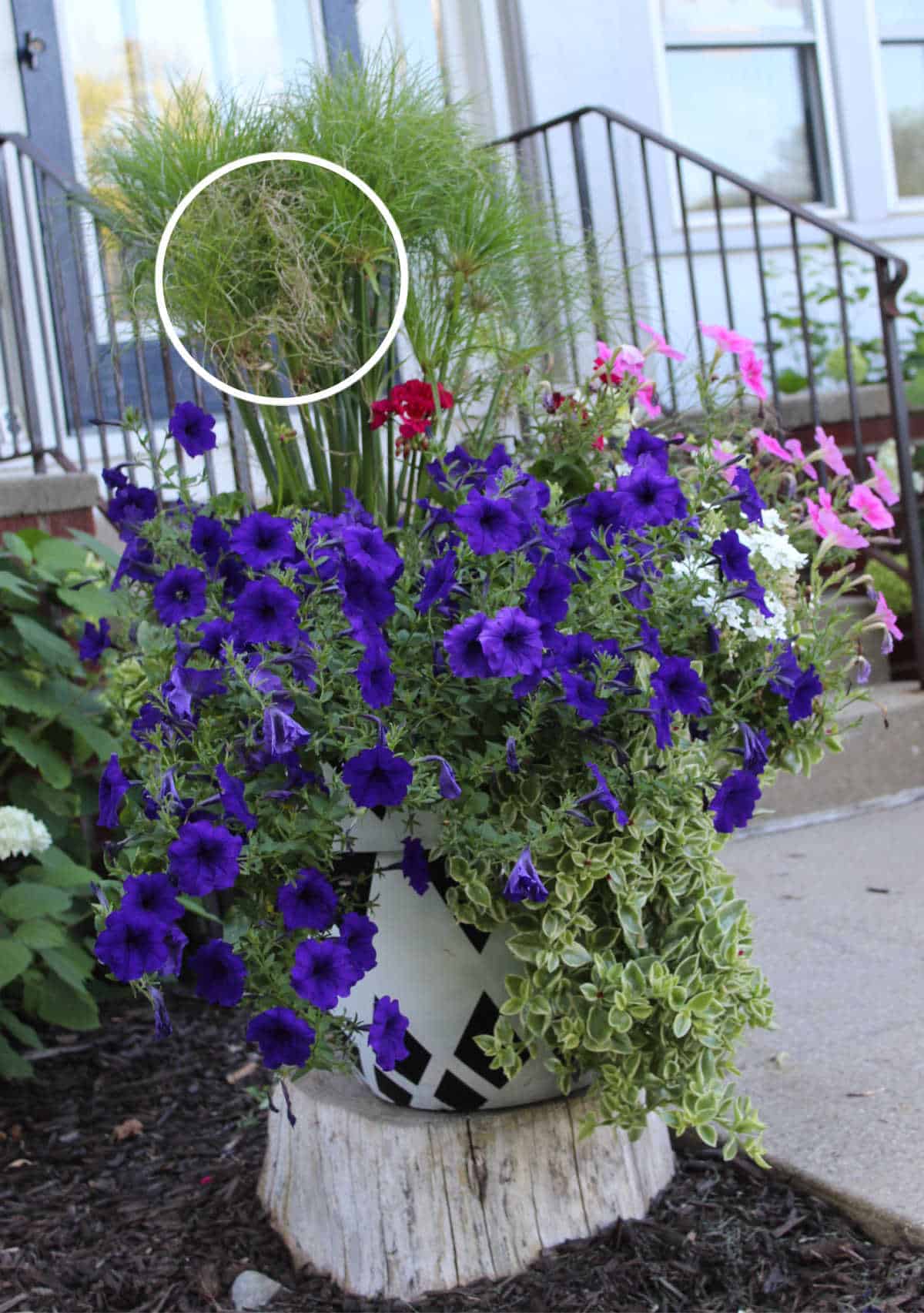 After a major trim, it usually takes 1 to 2 weeks and the flowers blossoms again, and the plant/planter looks nice and full.  A major trim (prune) feels aggressive but I think the plant feels so much better after a few days.

Petunias and many other plants should be pruned at the nodes (or technically the internodes) of the stem/branch. What you want to do is cut the stem close to but just above a set of leaves. That way you don't have these strange bare spikes sticking up everywhere. Take your pruners and find a nice set of healthy leaves and cut the stem just above the leaves. 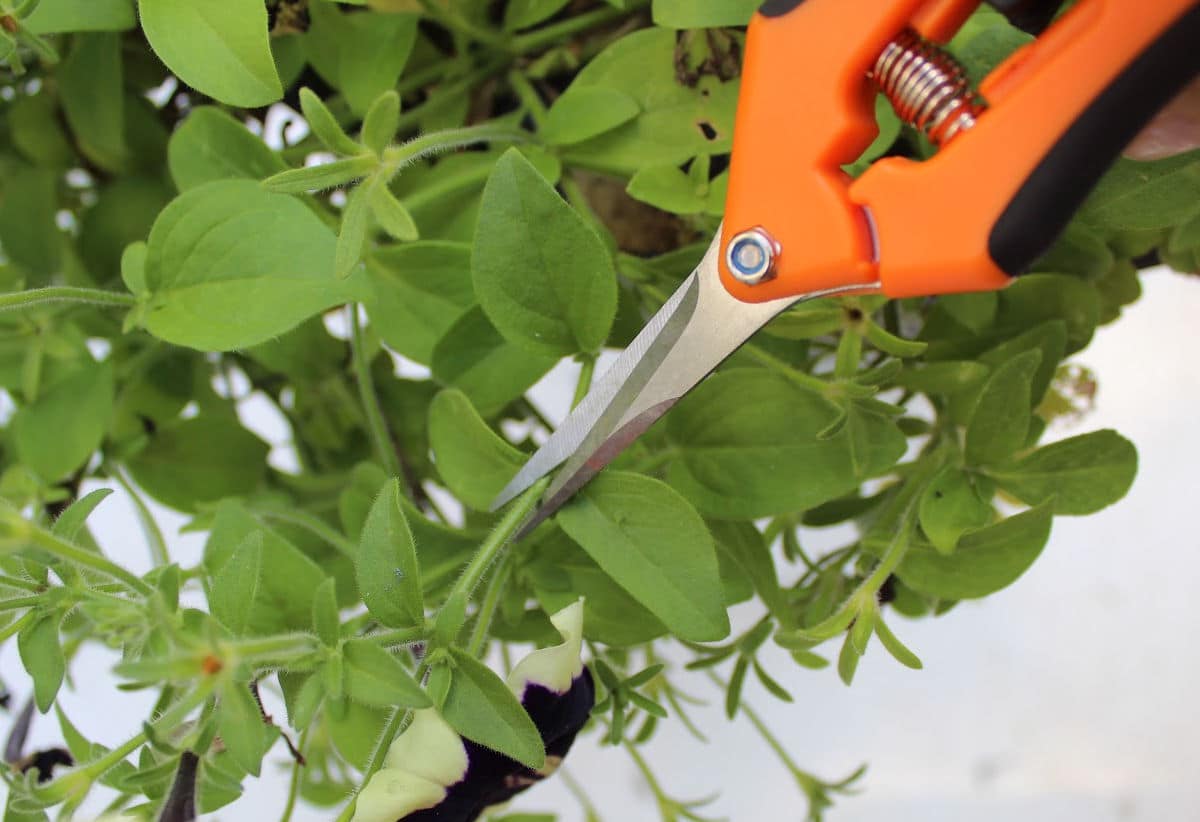 You deadhead most plants the same way.  Follow the stem of the flower to the first set of healthy leaves and trim there.  Below is a verbena flower that is getting trimmed off. 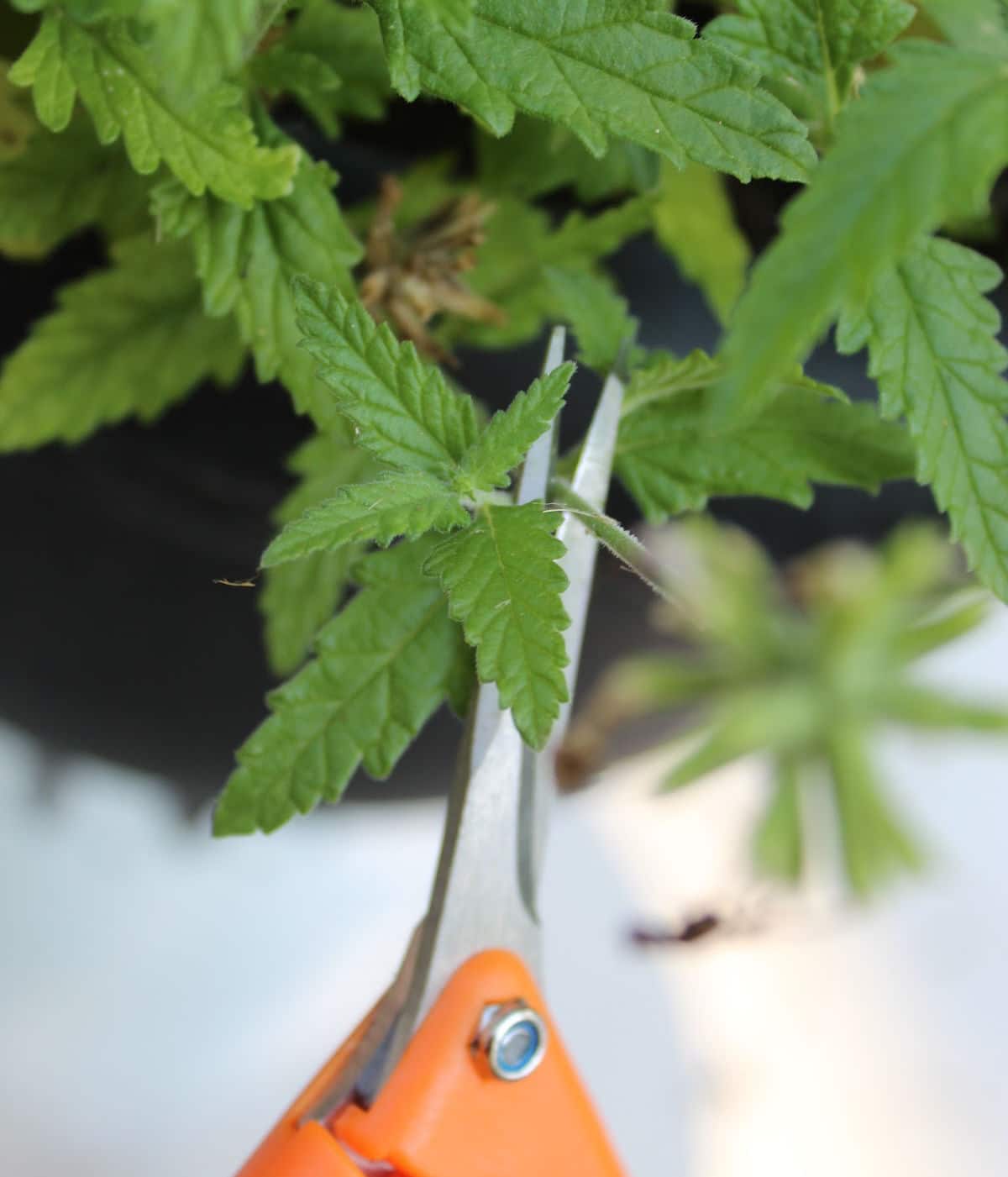 Geraniums are different, and if you are unaware of how to deadhead them, I wrote a specific post focussing just on deadheading geraniums (click the blue link to get there).  But the basics are to take your thumb and forefinger around the bottom of the flower stem (by the elbow) and then break it off.

My front door planters are large compared to regular planters.  And I like the white geometric pattern to show.  Did you know I painted them myself with spray paint?  It was easy and my black and white spray painted pots have lasted years!  Click the blue link to see how I made them.

After I trim and pinchback my plants

Here is what the planter looks like after it gets a good haircut!  Everything in the container and beside the container is from the one plant! 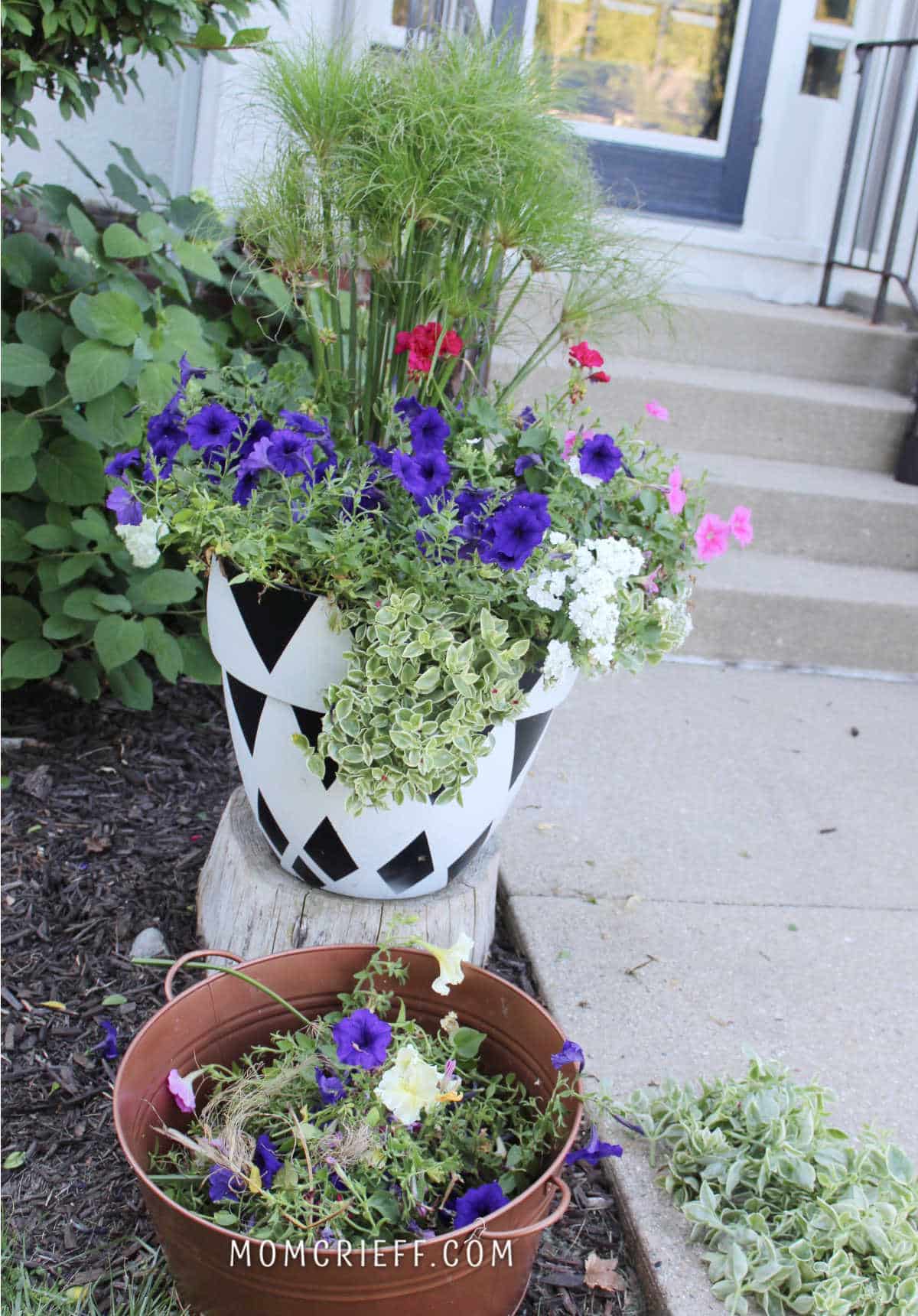 If you are still reading, let me share my backyard planter that I gave a good pruning.  My backyard isn't full sun and all my plants in my container displays tend to get leggy.  This planter is mostly crazy leggy petunias! 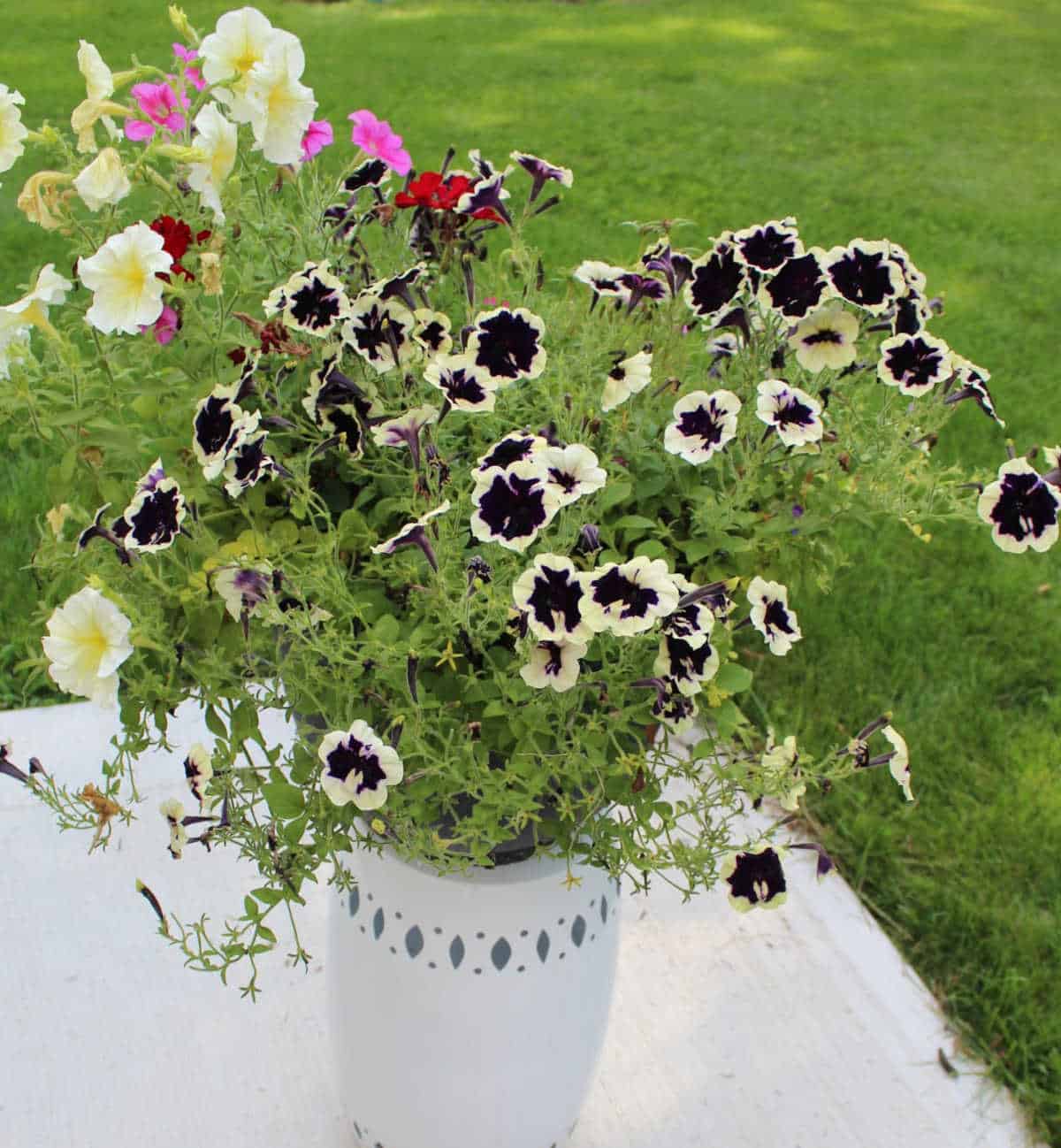 I felt like I cut soooo many stems.  But do take the time to cut them in individual lengths so the plants look more natural.  Some of the petunia stems I cut off are long!  You can see all the dead blooms along it. This one isn't the longest but it's one I remembered to take a picture of. 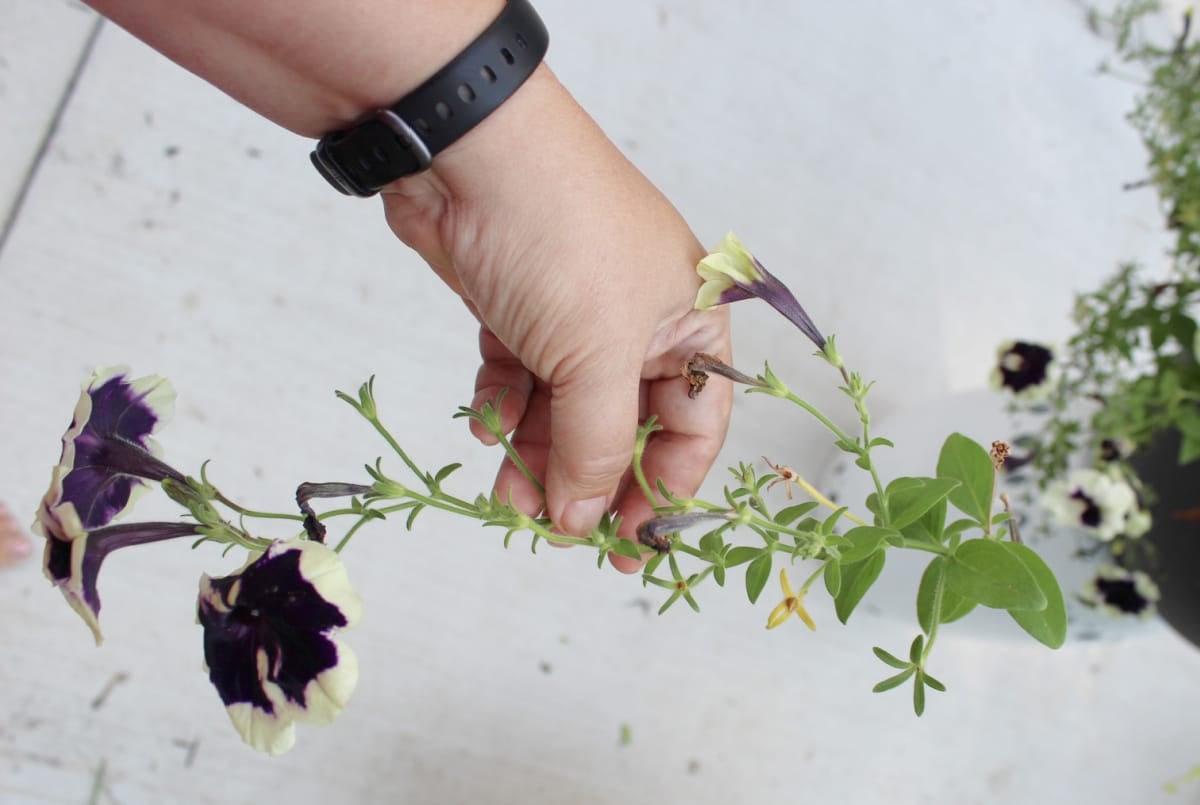 Below, I left just a couple of long leggy petunias on the plant just so you can see.   Those long ones were over a foot long! 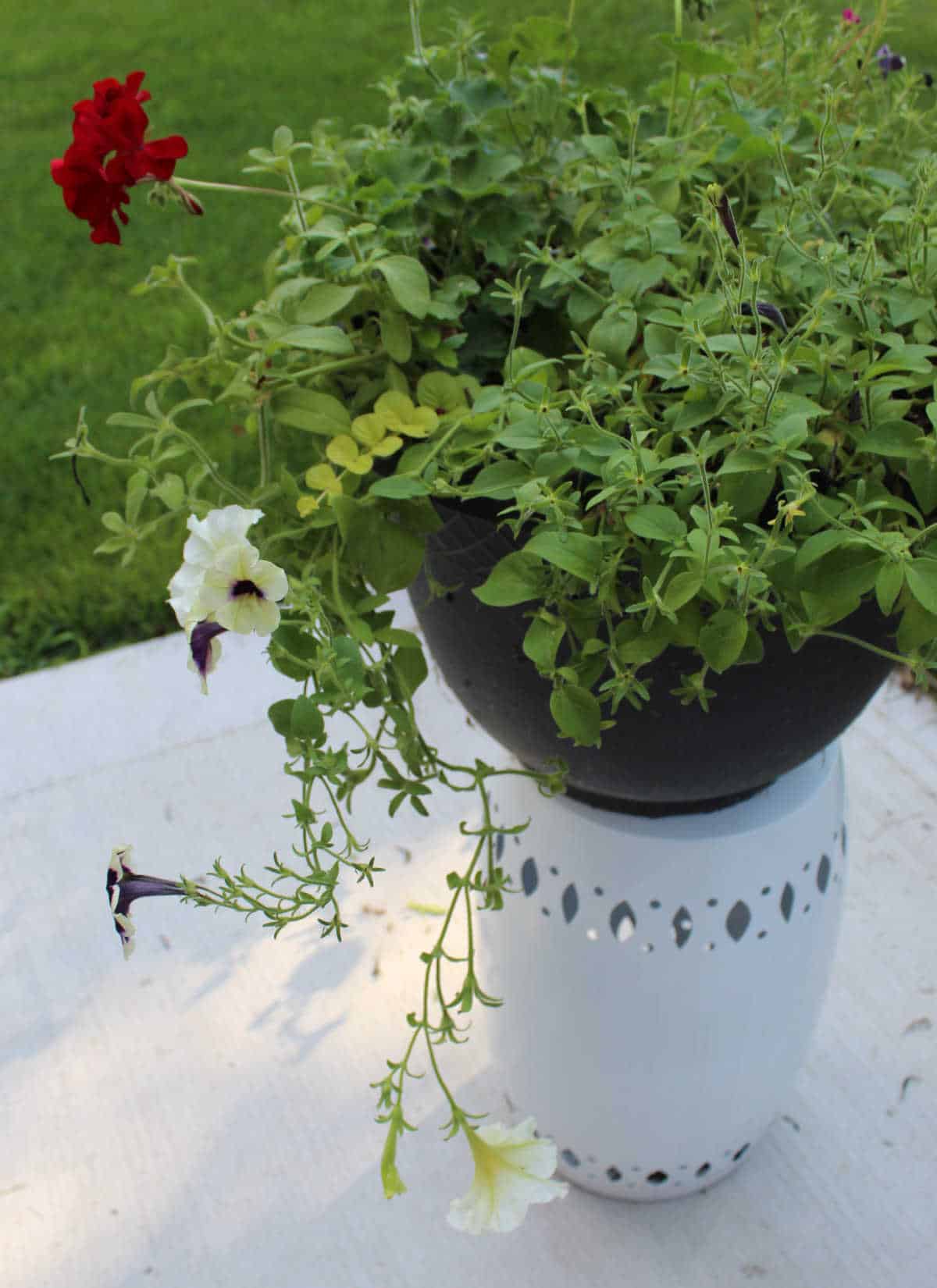 Even though I cut most of the petunia blooms off, I find the planter on the left looks nicer!  It just needs a week or two and it will be full of blooms again!  Plus, I didn't even notice the pretty red geraniums hiding in there. 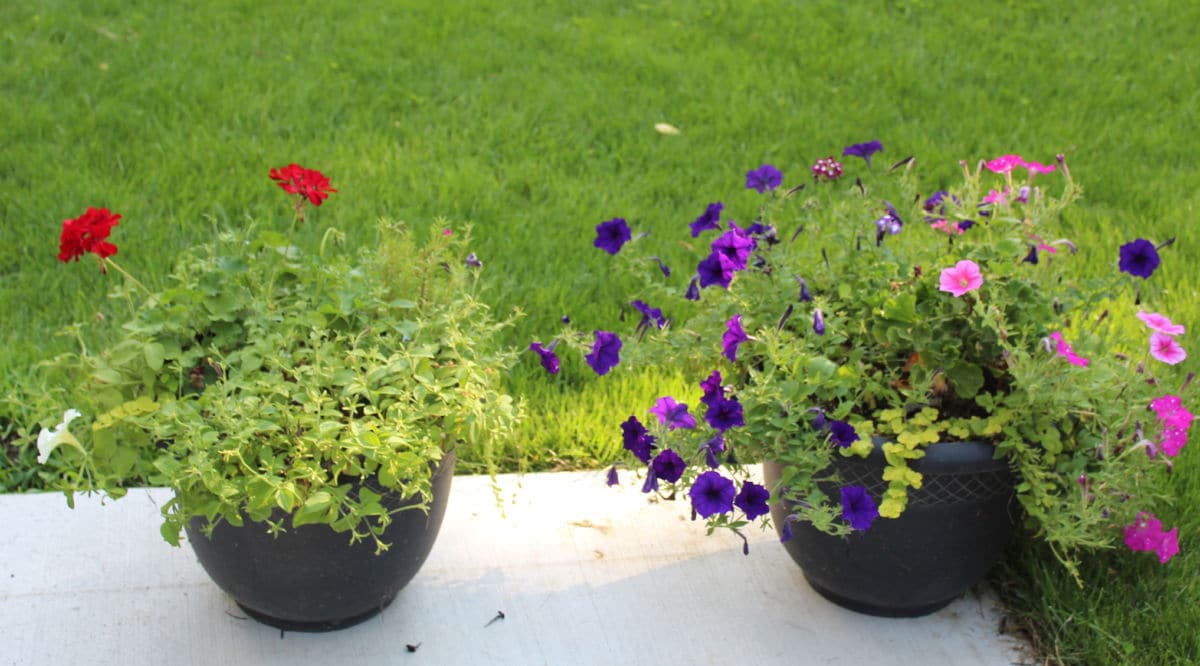 I hope this post helps you with tidying your planters and specifically with how to prune petunias.   A plant's sole purpose is to try to reproduce and that's why it has flowers.  By cutting off many of the flowers, it should bud and flower again.  The plant will try to bloom again and create seed pods.

Below is the plant (above on the left) after two weeks. It'll be even better in another week! 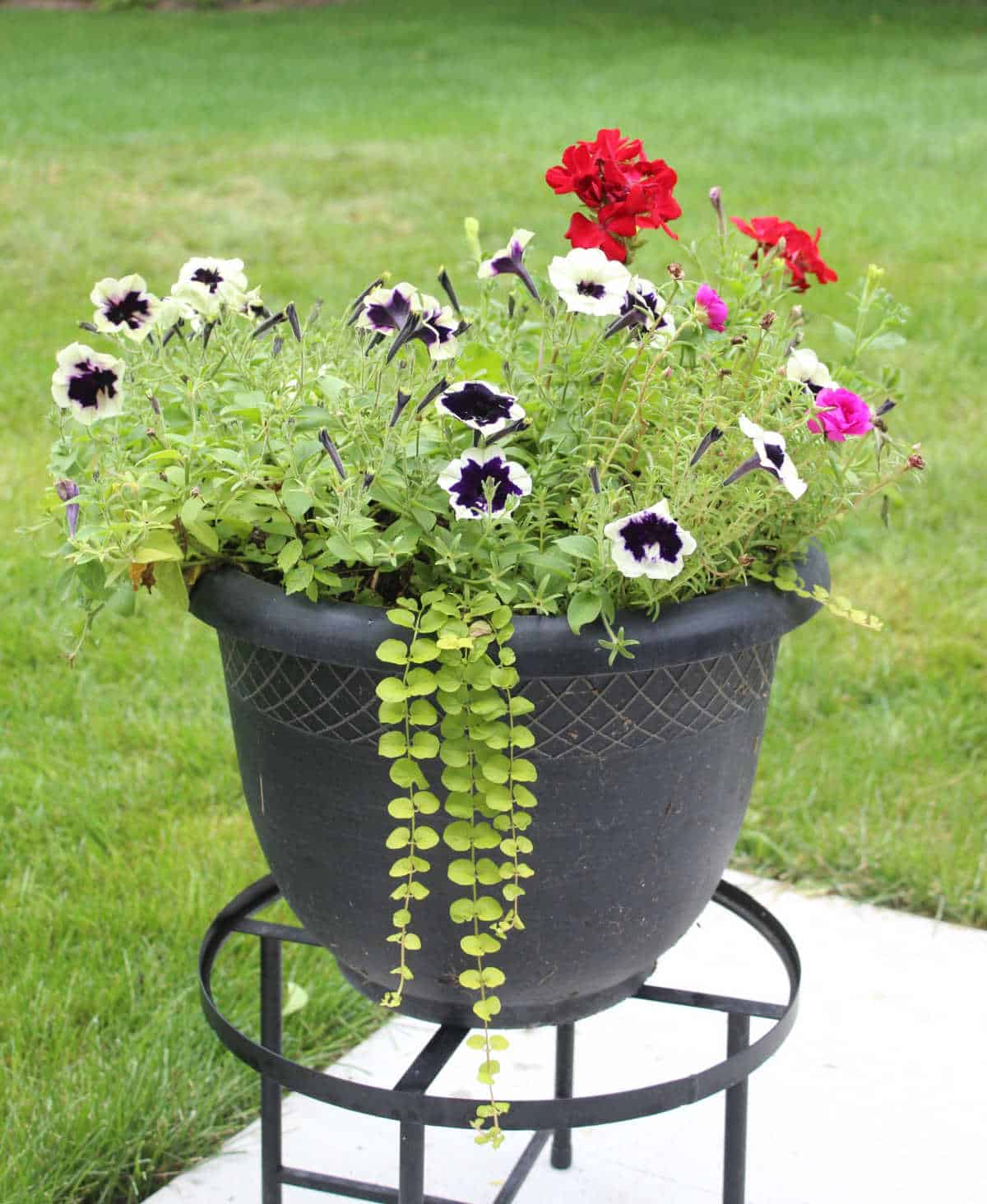 Don't be nervous doing this!  It does truly help the plant become both stronger and prettier!!

The planter two pictures above (on the right with the stringy purple and pink petunias) also got a good trim.

Below is what it looks like two weeks after a good plant haircut! 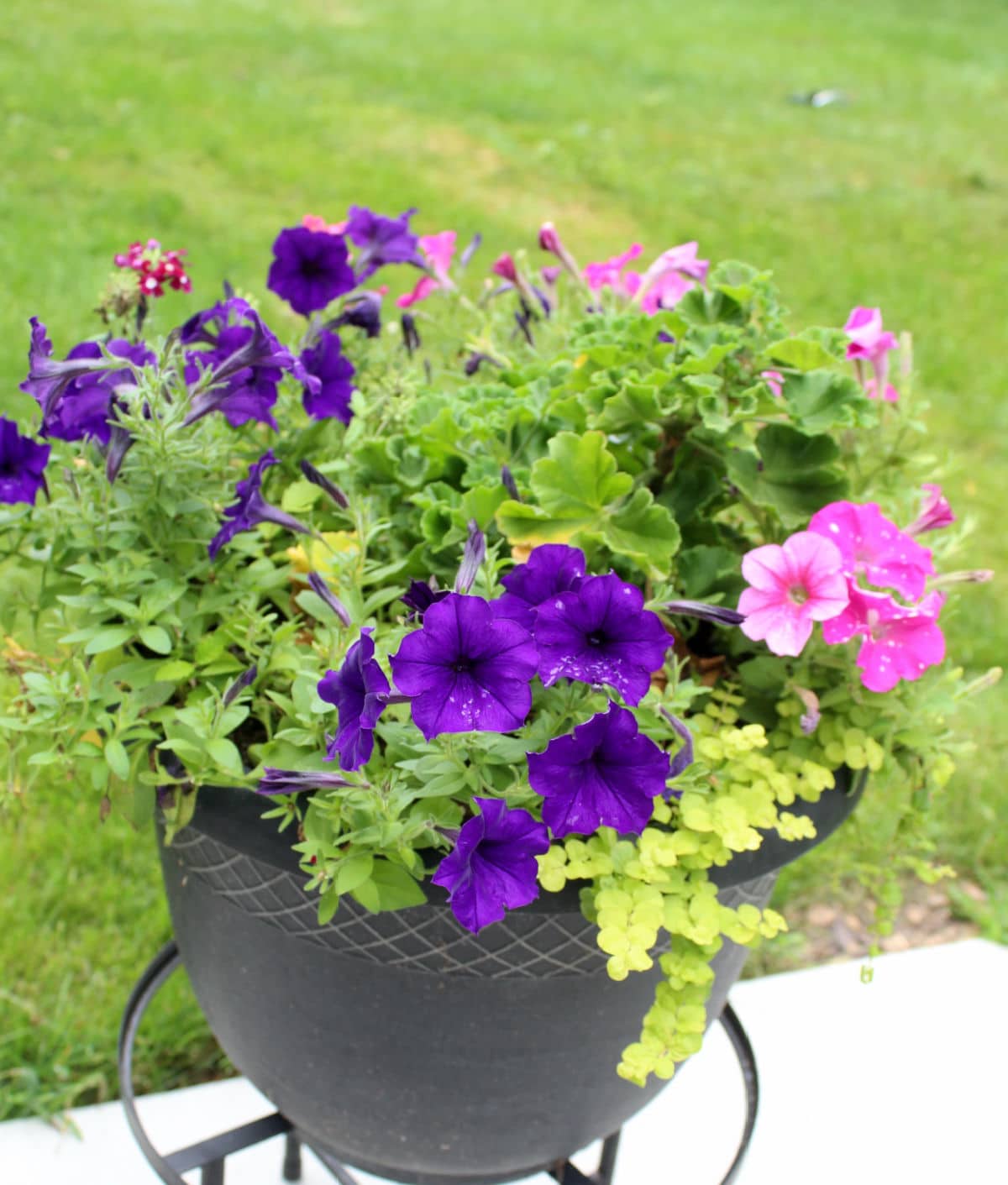 It looks so much fresher and it will get even better in the next week or two.

They are not perfect, but they don't look as wild and crazy anymore.  This helps extend their usefulness and keeps them looking good until it's time to start planting fall planters! 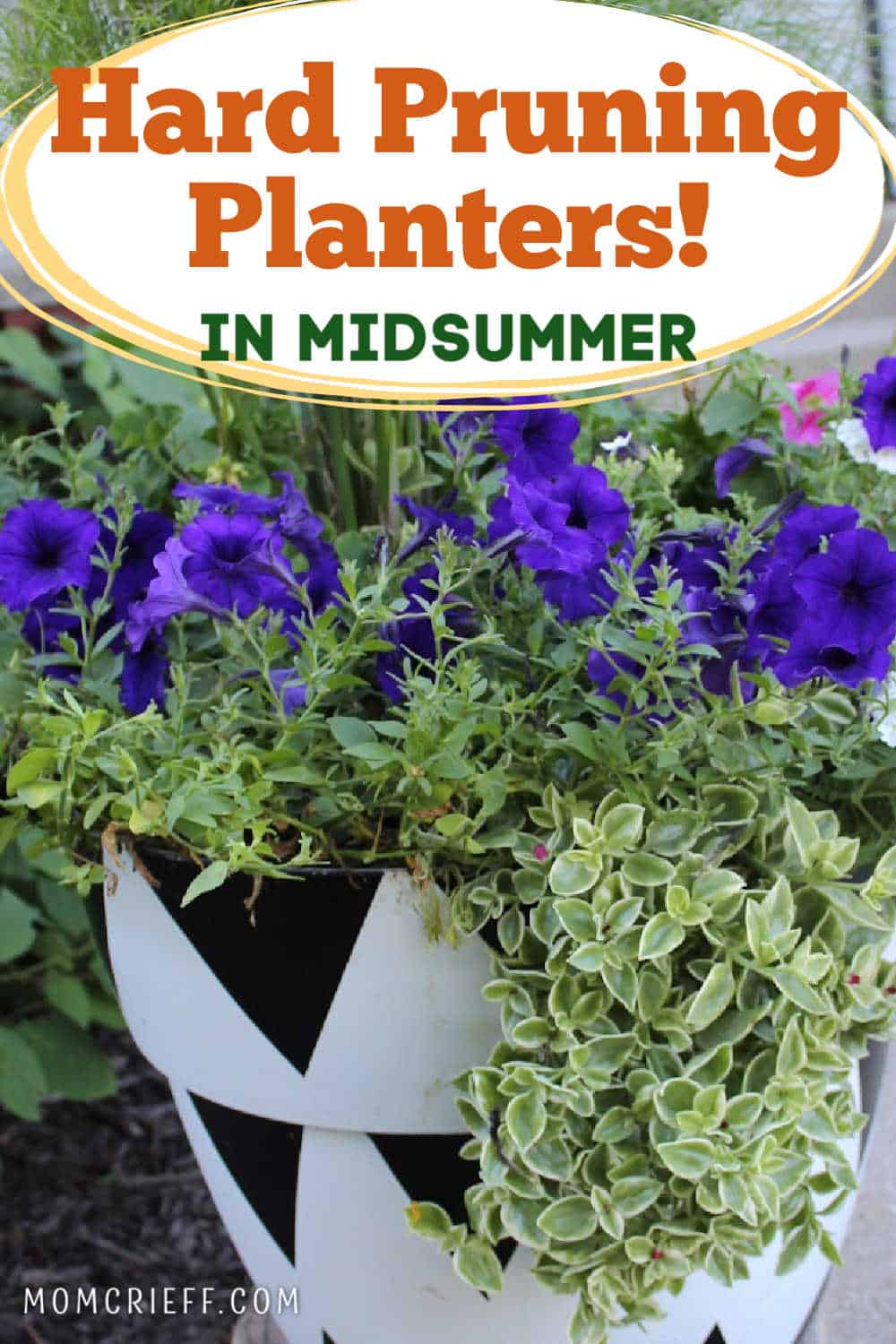