Wow, I almost missed this! I know it's not earth shattering but I do think interesting. As of Feb. 4th, the Canadian mint will no longer be circulating pennies. They stopped producing pennies on March 2012. It is anticipated it will save Canada approximately $11 million per year by doing this. 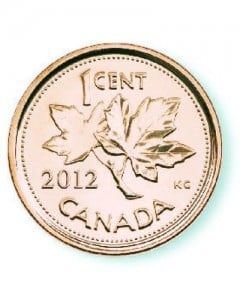 The last Canadian penny was produced on March 2012.

Just out of curiosity, I decided to do some quick research about the potential of eliminating the penny in the United States. According to Wikipedia, as of February 2011, the cost to produce a U.S. penny was 2.4 cents. Hmmmm, and it's only worth one cent! As I read the article further, one of the reasons some people are opposed to eliminating the penny is the cost of producing the nickel. The five cent nickel costs eleven cents to make. There are apparently laws in the United States banning the export of large quantities of coins since someone could make money melting down the coins and selling the raw material. To read more, follow the link to Wikipedia's article on the Penny debate in the United States.

Canadians are getting a crash course on rounding to the nearest nickel : ).